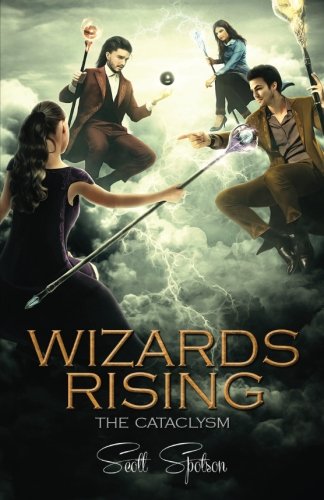 This book has a mysterious twinge in possibility and promise.  The Deadly Wizard Games is about when four wizards who are Indie, Justica, Demus, and Reggie come down on an unsuspecting Earth. Their claim was that they were going to help all of the Earth’s problems..  In the beginning, they meet with resistance to their rule, but soon the people began to see how the Wizards helped them with devices such as M- Coins, or Mortal Coins, new job creations, and… magic.  Twenty-two year old Amanda Fullerton decides she wants to take to role of Supreme Liaison, the ambassador between the Wizards, or the Liberators as they asked to be called, and the human world. When support for the Liberators begins to grow, Amanda dwells deeper into the Wizards’ lives, and she finds out many things that she was not supposed to know. After Demus shows Amanda his past and she sees the dreadful beginning of his realization of wizard powers, Amanda finds out that the  Wizards are human,  not extraterrestrial life.  As support for the Liberators start to reach a adventurous peak, Amanda finds herself in the middle of many Wizard games and public discussions, as well as deep dark secrets that may as well be the future of the human race.  After witnessing the destruction of human lives in an attempt to overthrow the Liberators, Amanda listens to the human rebels and gains the Liberator's trust only to spy on them. After spending time with Regi, the most compassionate of the four, she uncovers another secret. Wizards only live to twenty-five. After the wizards die (and a special bonding)  Demus teleports into her apartment and says he wants Amanda to forgive him before he dies. The two wizards behind him say Demus is doing good things after the last time she saw him.  Their last hour together consisted of magic chess. As Demus takes his last breaths, Amanda forgives him and lets the last wizard of the North American Council of Four member go.   Read the book to find out the intrigue and the uncovering of a deadly Prophecy.

This book has a very realistic view of life. Like dictators, the Liberators take over the country. When you are reading this book, it  wholly absorbs your attention, and you can't put it down. When you are finished it feels like you just got out of bed. The author is very talented to have such detailed scenes. There is action in this book almost unrivaled. To you,Harry Potter fans, this book would give you something to read once you have read all seven Harry Potter books. I think when you read about all the problems that are going on in the book, the Wizards are truly needed. Happy Reading!,

There is nothing offensive to other people or things. However, there is violent content.
KEYWORDS

Read more reviews by this Litpick Book Reviewer: lovereading
Recommend this book and review to your friends on Facebook