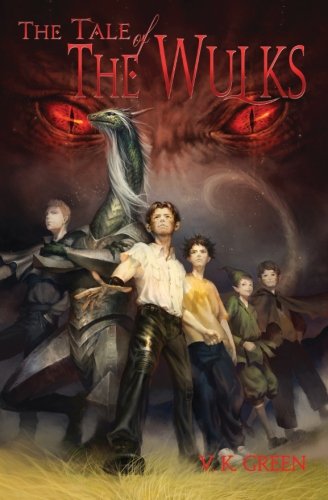 An action-filled adventure awaits you in The Tale of the Wulks. It is an electrifying book about a fourteen year old named Rilk and his companions. Rilk is autistic and a wulk. A wulk is a creature that is almost exactly like a human; the only differences are that wulks have thick hair on their faces and they grow tails at the age of eighteen. Rilk and his friends are having a party at his house. After the party, Prince Englar, and Rilk's grandfather, Manfield, have a conversation with each other. Prince Englar is a dragon from the dragon planet. During the conversation, Prince Englar tells Manfield about the vision he had. The vision was of an old evil being named Lord Vanko, who tried to take over the world once before. He had been held off on that one occasion but was not defeated. In the vision, Lord Vanko returned, and Prince Englar and Manfield must stop him once and for all. Prince Englar and Manfield leave the party to thwart Lord Vanko's plan of world domination.

When Rilk sees them sneaking off together, Rilk and his companions grow suspicious and decide to follow them. They catch up to Prince Englar and Manfield with the help of some new companions. Then the group demands to know what is going on. Finally, Prince Englar and Manfield reveal their quest to them and allow them to come along on the journey.  Along the way, the group meets more new companions, both mythical and human. On their journey, they overcome many obstacles. Can they find the courage to defeat Lord Vanko? Will good triumph over evil? Read The Tale of the Wulks yourself to find out!

V. K. Green wrote a great book full of adventure, mystery, and magic. The Tale of the Wulks was filled with epic, well-described battles as the characters undertook their journey to prevent Lord Vanko from taking over the world. I really liked that the author, who has autism, related autistic traits to the readers as assets rather than deficiencies. The descriptions were really great. Something else I liked about the book was that the author brought together old mythical creatures and new ones to form a book that turned out magnificently. A part in the book that I liked was when Jack tricked a troll into thinking he was another one of Lord Vanko's servants, too, in the hopes of saving one of his friends. However, something I did not like was that at the beginning of the book the characters were not fully defined; I got them mixed up a bit during the first 70 pages. Luckily, they were described more completely as I read further into the book, which made it easier to recognize each of the characters. I can't believe this book was written by a high schooler, especially since it was over 600 pages long! V. K. Green's debut novel is very insightful. I think this book would be most enjoyed by ages twelve through seventeen.

There were a few bad words and descriptions of death.
KEYWORDS