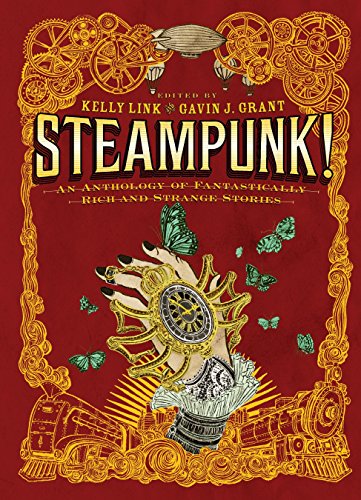 Steampunk!: An Anthology of Fantastically Rich and Strange Stories is exactly what it says on the cover--a collection of rich and strange stories that all, in some way, have to do with the theme of steampunk. When I first heard of this book, I was instantly intrigued. Writing a steampunk novel is already tough work, setting the scene and all, but imagining fourteen short stories that all would create unique steampunk worlds in just a few pages was beyond me. Thankfully, I had the opportunity to read and review this book! Steampunk features the creations of fourteen different authors, including two comic strips. There are a variety of different settings and characters here, and all of the stories think out of the box by not using the stereotypical Steampunk Victorian London setting. Though the stories deviate in length and quality, the overall quality of this book is quite fantastic.

We open the collection with Cassandra Clare's "Some Fortunate Future Day". Exploring the theme of time in a lonely world, this story is about a girl named Rose who meets an alluring stranger. It's a great choice as the opener with its solid writing and classic steampunk robots and clockwork. It's short, simple and leaves its ending up to the reader.

The second story is Libba Bray's "The Last Ride of the Glory Girls". This explores the theme of time as well, but delves in much further. There's a distinctive Wild West feel to it, and I enjoyed the writing but disliked the ending.

Next is "Clockwork Fagin" by Cory Doctorow. Though its setting isn't especially imaginative,  this is still easily one of the best stories in the collection, as its plot is simply stellar. It has a great ending and the two main characters are fantastic.

After that we get the first comic strip, "Seven Days Beset by Demons" by Shawn Cheng. His comic explores the Seven Deadly Sins through a simple and clever love story that carries traces of steampunk.

Ysabeau S. Wilce's "Hand in Glove" follows that. This was another standout in the collection, with its unique writing style. There's a foreign flair to the setting that you can't exactly place, and the characters are believable--especially the main character, who you can't help but cheer for.

"The Ghost of Cwmlech Manor" by Delia Sherman was a pretty typical ghost story with a romance, and some hints of steampunk. The writing style was typical, and though it's an okay story, since it followed "Hand in Glove", I found myself disappointed.

I didn't enjoy "Gethsemane" by Elizabeth Knox very much either. Though its first line is intriguing and introduces us to a unique setting, things quickly get downhill from there. The story is paced awkwardly, and there doesn't seem to be much steampunk in it.

"The Summer People" by Kelly Link was easily my least favourite entry in the collection. It is utterly forgettable--in fact, while writing this review, I had to look back to my book just to remind myself of the point of that story. The writing style, characters, and setting are all boring. Quite honestly, this story almost caused me to stop reading the collection.

Thankfully, Garth Nix's "Peace in Our Time" stopped me from doing that. This story explores the theme of just how much power should be given to one person--all in one scene. It's one of the shortest stories in the collection, but incredibly imaginative and thought-provoking.

"Nowhere Fast" by Christopher Rowe was a fairly decent story. Nothing special, just a simple steampunk setting with romance and an ending that seems like a beginning.

After that is "Finishing School" by Kathleen Jennings, the second comic strip in the anthology. I found the art refreshing and the story fun to read, even though I'm not a big fans of comics and was a bit confused as to the plot.

"Steam Girl" by Dylan Horrocks is the longest story in the collection, clocking in at 45 pages, and I would argue that it's too long, even though the chemistry between the two main characters is irresistible. The length of the story makes the ending slightly disappointing, but the story seems to carry a meaning that is quite thought-provoking.

The penultimate story of the collection, "Everything Amiable and Obliging", is by Holly Black, and it explores love in a world of steampunk--specifically, loves that should not be. The characters and setting aren't special, but the plot is.

And, finally, the last story in the collection. I have only one word for you: WOW. "The Oracle Engine" by M.T. Anderon was easily, easily the best story of the collection and one of the best stories I have ever read. It's so outrageously unique, and the writing style make your jaw drop, thinking: "How does he do that?!" I won't even describe the plot here--you have to read it and experience it for yourself.

Steampunk!: An Anthology of Fantastically Rich and Strange Stories is easily worth your time, and there is quite literally a story for everyone in here. Whether you've never heard of the word steampunk, or you spend your days arguing whether Jules Verne invented the genre, this anthology comes highly recommended.

There's some profanity, but nothing really intense.
KEYWORDS