The Fog of Forgetting review by MezokaCapturer65 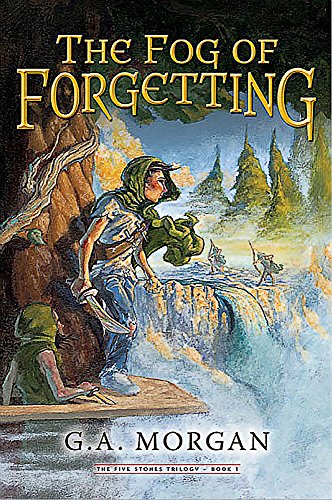 Three brothers named Chase, Knox, and Teddy are being taken down to their family’s summer home, looking forward to getting away from their school. When they arrive, they meet two young girls, Evelyn and Frankie, rescued from a Haiti orphanage by a woman who lives nearby.  Impatient to get to ride in the family’s boat, Knox decides one day (when the weather is less than ideal and while his parents are away) to take the boat out without permission.  The other children end up going with him, and they disappear into a massive wall of fog and find themselves in a place called Ayda.  They meet another person who had washed up on Ayda’s shores, Seaborne, and he introduces them to the features, people, and places of the magical land of Ayda.  Along the way, Frankie is kidnapped by the leader of one of the groups of people who inhabit the land, and what follows is a long journey with the remaining children encountering more people and more fantastic places while they search for Frankie and a way to get her back.  The children learn more about Ayda’s origins, its separation into four groups of people, and the mysterious secrets of the magical stones, kept by the Keepers of each land, which keep the world in balance.  They also experience difficult questions and tasks which teach them about who they are and, literally, where they belong.

Although not very challenging contextually, this book was fun and light hearted, but still found good moments of seriousness that kept it from being just a simple book through and through.  This book is very focused on the power of nature and the power of the circle of life with the element of daylights.  I think that the element of daylights added a lot to the story, showing how the children are all similar in some ways, like in their intellect and their emotions, and also how they are different. The concept of magic was well handled in this book, with it being distributed among a few individuals rather than being given out or all over the place, which could make a story like this less believable, within context.  One thing that I thought could use some work was the way that the narrator transitions between the thoughts of each character, sometimes several times per chapter.  It seems somewhat disorganized and can make it difficult in some places to remember which character thinks what because of all the back and forth.  Another thing is that events seem to come and go very quickly in this book.  In some places it adds to the urgency of the situations and makes the story fast paced, but in others it seems like more details should have been added.  An example would be a few of the times that the children are traveling alone, and a few days pass by within a page or less.  It just seems like there should be more to them, since traveling is such a prevalent theme in the story overall.  This book definitely made me feel a few years younger and was good at making me recall my feelings and experiences back in that time. I would recommend this to young adults with a taste for stories involving magic and mystery, and to anyone who wants to feel young again.

Read more reviews by this Litpick Book Reviewer: MezokaCapturer65
Recommend this book and review to your friends on Facebook