The Trap review by MezokaCapturer65 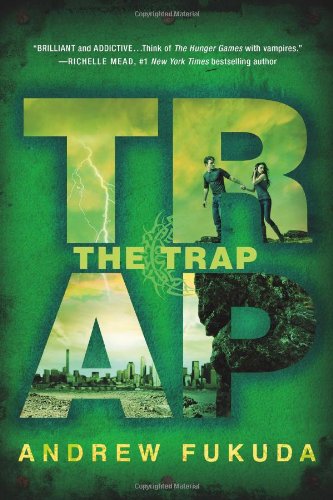 The third book in the Hunt Trilogy begins with the train still traveling with everyone who made it on at the end of the last book after the Mission was demolished by duskers.  Upon reaching the station, Gene, Sissy, the remaining boys, and one of the Mission girls make it into the enclave at the end, and therefore to the temporary safety of the catacombs underneath the palace of the dusker Ruler.  There, they are kept with other humans to await consumption by the Ruler and the staff.  However, the Ruler has another plan in mind for Gene.  He needs to have Ashley June, a human transformed into a dusker who miraculously survived the trip to the Mission and who plans to reveal the existence of the Mission to the dusker public, which would be very bad for his reputation.  One of the boys has been sent already, and Gene insists that Sissy accompany him on his attempt to get the job done.  What follows is a series of chase scenes and near death experiences for Gene and Sissy as they try to remain alive.  Along the way they discover the dramatic truth of the world in which they live, what they really are, and what their future together must be.

This book, like its forerunners, was intense.  For readers who like action and plots that are not fully realized until the end of the story, this series is a good one to pick up.  The majority of this book is action scenes that require the characters to do some quick thinking.  The continuity is kept up nicely and is patched up in some places where I had questions left over from the previous books.  The ending was the kind that I enjoy the most, one which makes the reader reconsider the whole series and rethink everything that was stated about the world.  The ending reveals that the roles of the two primary species of the series, the duskers and the humans, are, in fact, completely reversed from what the characters and the audience believed.  It also reveals the time period in which the story takes place.  I recommend this book to those who enjoyed the previous installments in the series, as well as anyone who enjoys action-packed and suspenseful series.  The only thing which I think could have been explained better was the taking of dusker technology by the future human inhabitants of the world.  The end of the book makes it sound as if Gene and Sissy can recreate what they saw in the metropolis and palace, but we are never given any evidence that they have this capability.  We are also not given an explanation for why it took so long for the human race to develop these technologies, long after Gene and Sissy would be dead.  I would also have liked a more definite end to the story arc of Gene’s father.  It is hinted at the end that he committed suicide after learning about the secret of what he had discovered about his species, but we are never given anything factual.  However, these issues with the story’s credibility did not impede my enjoyment of the book.  The intensity of everything happening and the ability of the writer to make me care about these characters made it very enjoyable.