The Rise of Renegade X review by AngelLoezaLomeli 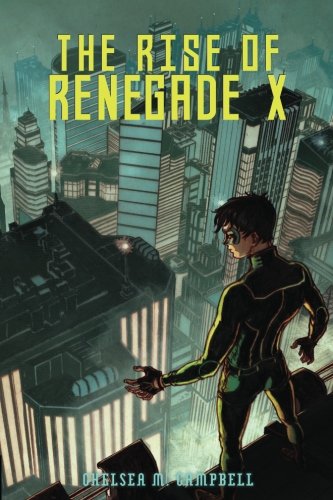 The Rise of Renegade X
by Chelsea M. Campbell
Age Range - 12 and up
Genre - Adventure

Damien is the 16-year-old son of a super villain mom and wants to be just like her. One night he gets assigned a letter that he doesn't like on his thumb, which will put him in a category he doesn't want, half super hero and half super villain. In his world, as soon as kids turn 16 at midnight, a letter appears on their thumb dictating who they're supposed to be from there on, Damien did not like his.

Damien likes to cause trouble and pretend he's tough because he doesn't want anybody to like him and he wants people to think of him as a super villain. He likes to get revenge on others because that means he'll get to scare and get rid of people he doesn't like.

Later in the story something happens and he starts reconsidering his decision of wanting to be a super villain. What is Damien to do?

I like the way the book was written. I felt like I was part of the story watching the action happen

My favorite part of the story was when Damien reconsidered his decision of wanting to be a super villain, because this made me think that he was finally going to be a super hero! I liked when Damien put robotic scorpions in the backpacks of the bullies that bothered his friends. I thought it was funny when they got scared and after I read that I thought:  "So, what happened to acting all tough and not being afraid of anything?"

I would recommend this book to any kid that's a fan of super heroes.

I feel this book is geared to readers maybe 8 and up as it has some violence, some things only older kids may understand and it's a chapter book. It's a book kids can enjoy.
KEYWORDS

Read more reviews by this Litpick Book Reviewer: AngelLoezaLomeli
Recommend this book and review to your friends on Facebook