Once Upon A Time In America (The Lance Chronicles ... 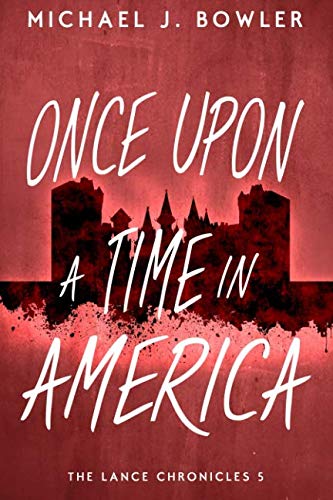 Once Upon A Time In America (The Lance Chronicles - 5)
by Michael J. Bowler
Age Range - Mature Young Adult
Genre - Fiction

Arthur, Lance, Ricky, and the rest of the knights of New Camelot are back for the final installment of The Lance Chronicles series. After their initial pitches about their Children’s Bill of Rights in the previous book, the knights have now set out on a tour across the USA to influence the state legislatures to support their bill. The knights are more than a little worried, though, as their mysterious assailant has promised to kill Lance, Ricky, and their entire crusade before the boys’ eighteenth birthdays - less than six months away. Due to the ferocity of the shadowy attacker’s previous attacks, the kids have little doubt that he isn’t bluffing. In spite of this, the knights cannot back down in their quest for children’s rights, or the enemy will have already succeeded.

Before long, their fears come to pass, and a deadly assassin tries to kill Ricky! The team works together and manages to avoid harm, but during the skirmish, Arthur inadvertently drops Excalibur off a balcony. The sword lands blade first in the head of a stone dolphin, prompting Lance to retrieve it. Oddly enough, Lance pulls the weighty sword free as if the stone were little more than butter. Suddenly, the sword begins to glow and Lance feels a tingling sensation run up his arm. As quickly as the mysterious glow had appeared, it fades, prompting Lance to wonder if he merely imagined the incident. On the contrary, the thousands of people who witnessed the same glimmer of light prove otherwise, leading Lance to worry about what it could mean. With attacks at every turn, and enemies around every corner, will the knights of New Camelot be able to finish their crusade and gain the children of America more rights? Or will their attacker prevail and make good on his threat to kill the boys before their next birthday? And why exactly did Excalibur start glowing?

So ends the tale of The Lance Chronicles. This was an amazing series, and I enjoyed every second of the incredible journey. It was wonderful getting to watch each of the series’ characters grow and change before my eyes. Each character learned incredible life lessons throughout the series. Those lessons allowed each character to mature into a better person than when they started out, making them all the more realistic.

The series, as a whole, was amazing, but if I had to pick one book as my favorite, I would definitely pick book five. This book’s mind-blowing action reeled me in and made it hard for me to stop reading until the final page. There were two parts in particular that Michael J. Bowler did an especially good job writing – the climax and the ending – which deserve special mention. The former was written beautifully, and Michael did a great job capturing the characters' emotions during that particularly tense portion of the book. The masterful writing succeeded in pulling the reader even further into the conflict, making it feel hyper-realistic. This feeling of realism lets readers feel as if they are walking alongside the characters as they head into the most dangerous portion of their mission. The ending was just as remarkably written but in a different way. The same emotions that suffused the book’s climax were present once again, which made the ending truly special. Not to give too much away, but I was genuinely able to feel the characters’ pain and sadness. All in all, The Lance Chronicles was a great series that I feel almost anyone would enjoy.

There is some death, language, and suggestive content. In addition, there are some violent scenes that include a good bit of blood.
KEYWORDS