The Illuminated Forest review by jotaf 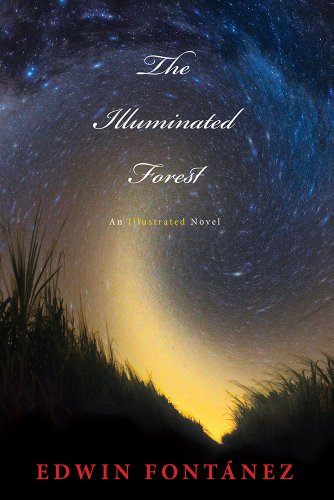 The Illuminated Forest is a book about a twelve year old boy named Mateo.  The story begins not long after his Aunt Minerva dies.  The toll of losing her is very hard on Mateo, for she was like a second mother to him.  The funeral will be in the town of Palo Verde, so his mom takes him there to attend.  His grandparents also appreciate their coming during this time of loss.  After the funeral, for reasons even Mateo doesn’t understand, he decides to ask his mom if he can stay with his grandparents in Palo Verde.  After she leaves, he is not sure it was a good idea to stay.  He tries doing things to entertain himself because his grandparents don’t have a TV.  He reads and plays with his friend from past trips to the island, but it doesn‘t help much.  When a mysterious stray cat starts showing up, that all changes.  What is different about this stray than any other stray off the street?  How will Mateo learn to cope with the death of his Aunt Minerva?  Find out in The Illuminated Forest!

I thought The Illuminated Forest was a great book about coping with death and growing up.  I liked that the author, Edwin Fontánez made the characters fairly easy to connect with.  Another part I both liked and disliked was that part of the book was written from the perspective of the stray cat; it  put part of the book in a new and interesting perspective, but it was also sometimes difficult to understand because of the awkward use of language (in its head) by the cat.  A part in the book that I thought was really funny was when the owner of the small theatre in Palo Verde played The Graduate, but the owner did not read the description of the movie.  Being ignorant of the inappropriateness of the movie, she advertised it as, "An inspiration for kids to graduate!"  Her advertisement got lots of families with kids to come see the movie.  The next day all of the parents of the families that saw the movie were pounding on her door for what she accidentally did.

One thing I did not like about the book, though, was that at the beginning it jumped quite a bit, starting with Mateo being fifteen, then Mateo being twelve, and then it jumped to a six year old girl, and after that, to an Indian tribe that used to live in Palo Verde.  Finally, though, it settled on twelve year old Mateo.  The other thing I disliked about this book was that it got a little dull at parts of the book and it took a little while for the book to get going again.  I think this book would be most enjoyed by anyone ages twelve through sixteen.

There is some bad language and a guy that drowns.
KEYWORDS