The Tale of Cloran Hastings review by jotaf 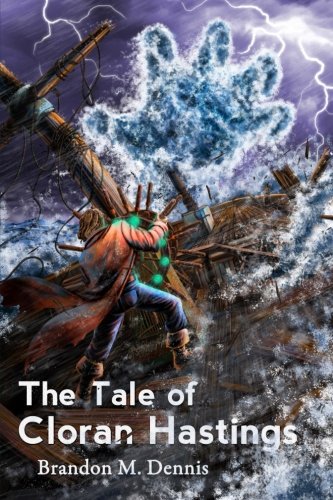 The Tale of Cloran Hastings
by Brandon M. Dennis
Age Range - 12 and up
Genre - Fantasy

The Tale of Cloran Hastings is a book about a sailor named Cloran and his crew and their relationship with the sea.  Cloran captains the ship Wavegrazer and is the most skilled captain around.  Cloran has just come home from a nine month journey and is exhausted.  That same day, he receives a message from King Bozin requiring him to sail to the Island of Miotes to retrieve his daughter.  Unluckily for Cloran, he was going to retire after his nine month journey so he could be with the love of his life, Adaire.  He promises Adaire that he will come back from this forced, dangerous journey and when he does, he will marry her.  Soon after repairing, reinforcing, and restocking his ship, he sets off on his journey.  Will he survive the sea serpents, marauders, violent storms, and other dangers?  Find out in this mystical adventure!

I really enjoyed The Tale of Cloran Hastings because it was adventurous, exciting, sad, and surprising.  One part I really liked that made it exciting was when Cloran and his crew were attacked by man-wraiths and had to fight their way out of their predicament.  One thing I didn’t enjoy so much was that, even though this was book one, it felt like there was more to the story before this; it just kind of jumped right into the story.  Also, at the end, it left me hanging.  I would be really sad if the author didn’t make a sequel.  Overall though, this book was a real page-turner; I just couldn’t put it down.  I would recommend this book for ages 11 and up because there was some death, blood, and other mature content.