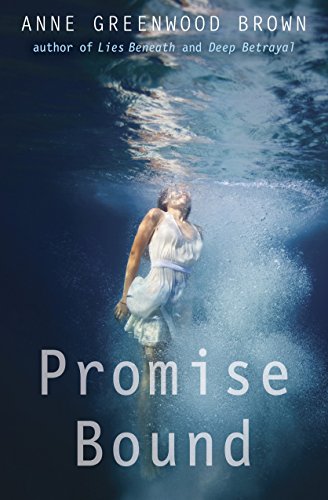 Calder and Lily, Mermaid and man extraordinaire, won’t ever live a quiet life. It seems that they keep jumping from frying pan to oven and back. They only want to future their relationship, and look toward their future—not Lily’s feuding family history. When Lily’s necklace sends her visions from Nadia, head of the mermaid clan, she knows that the future isn’t possible at the moment.  Together Lily and Calder are tasked to complete the Nadia’s unfinished business, even if it tears them apart.  With it including power lusty mermaids, long-lost family and murder, can they even do it? Lily and Calder are determined to for the future they want. After all, you can’t look to the future until you’ve resolved the past.

Ms Greenwood Brown certainly does know how to spin a good story.  Mystifying, heart-wrenching, and enticing, Promise Bound is a book like no other.

Promise Bound being a finale to a trilogy, I expected to be at least moderately confused. I had not read any of the previous books of the series, and so had no prior knowledge of any of the characters.  However, it wasn’t a problem.  Ms. Brown beautifully spins the story where, if you never read the series, you could still understand nearly all the actions.  Truly independent story, it can stand on its own two feet—for that reason I was hooked from the beginning.

Brown’s characters kept my attention with their magic.  The leading characters—Lily, Calder and family—were especially well done, only with perhaps one instance or two of inconsistency.   But the depth at which the character’s work is truly noteworthy and realistic.   Putting Calder and Lily aside, out of Brown’s characters, Danny stands out for his ‘realness’.  Brown does mention some side characters, Lily’s best friend as example, but does not, in my opinion, finish them in this book. In other words, they are loose ends in this finale.  I wished they were more finely finished.

With that, I must mention that at times, the book seemed a bit too fast paced.  Particularly after Calder returns, I felt that the novel was picking up a dangerous speed until the end.

In total, Ms. Brown creates a stunning, stand alone plot, with vivid descriptions and a romance that will have the reader eating out of her hand.   I certainly was. Calder’s and Lily’s relationship is just so strong, it draws the reader in, her action and intrigue keeping the reader in the zone.  Promise bound is sure to draw you in from start to finish, even if you hadn’t any prior knowledge about the series.