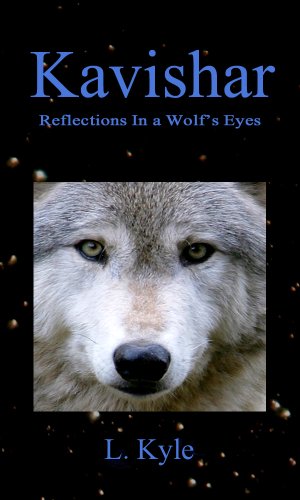 Kavishar: Reflections In A Wolf's Eyes
by L. Kyle
Age Range - 12 and up
Genre - Fantasy

In the book Kavishar: Reflections In A Wolf's Eyes the young wolf has always grown up in the woods.  To his surprise he and his best friend Chazmeck and the Young Master (Luc) all move to the Stonelands (city). Kavishar, being a full blood wolf, has a rough time adjusting to the way of the city. It makes it about ten times worse because almost all of the other dogs don't like Kavishar because he is a wolf. But some of the dogs don't mind that he is a wolf, like his friend Triee. Kavishar gets some harsh news while living in the Stonelands. He gets a little crazy and sometimes gets into trouble even more. Through all of his crazy adventures Chazmeck is right there by his side, even though their ups and downs. How much trouble can Kavishar really get into?

My opinion on this book is that it was amazing. The writer, L.Kyle, did an incredible job. When you think one thing is going to happen he surprises you with something that you wouldn't expect. Also he explained things in such a detailed way. If he described the forest, he would describe the color, shapes, and other things. There was always something that kept my attention. Kaviashar had various emotions that were shown well. I think the book was amazing and the writer did a great job.

The book had no cursing or any content that would be unsuitable for young readers.
KEYWORDS

Read more reviews by this Litpick Book Reviewer: Anastasia
Recommend this book and review to your friends on Facebook