The Island of Dr. Libris review by jotaf 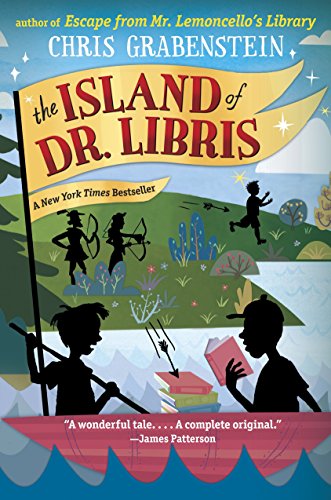 The Island of Dr. Libris is a book about a twelve-year-old boy named Billy. He is going up to Lake Katrine to spend the summer with his mom. His mom is renting a cabin at a cheap price from a professor at her college. Billy wishes he could stay with his fun dad. Instead, he has to stay with his mom in a place where fun is hard to come by, and when he breaks his iPhone it makes it even worse. Finally, his mom suggests he read some of the books from Dr. Libris' bookcase. He takes her up on her offer, but first he has to find the key. Using a riddle inscribed on the bookcase, he manages to find it.

Now able to get into the bookcase, he decides to read a book called, The Labors of Hercules. There is a picture on the bookcase that shows Hercules fighting a big rock guy. Feeling inspired, he turns to the page in the book where Hercules is fighting that character.  Billy sits down and starts reading. Suddenly, he hears something from the island and realizes that he is hearing exactly what is happening in the book. Rushing outside to see if he can see something, he notices a huge rock out there. At least he thinks it's a rock until he sees it move. Billy goes inside, closes the book, and the noises suddenly stop. Wondering if he is going crazy, he decides to try again tomorrow morning. Is Billy imagining things, or is someone playing a prank? Or craziest of all, could this actually be real? Find out for yourself in The Island of Dr. Libris!

I thought The Island of Dr. Libris was a great book. The author, Chris Grabenstein, did an awesome job putting together such a creatively imaginative book.  Another thing I appreciated about this book was that it was so fun; I enjoyed reading it and couldn't wait to find out what happened next. I could tell a lot about the main character, Billy. He is curious, a great friend, and very trustworthy. A part in the book that I really liked was when Robin Hood and Hercules meet on the island after defeating a villain. Out of sport, Robin Hood challenges Hercules to a duel with nothing but a long staff to defend himself. You can probably guess how that went. I don't think there was anything I didn't like about this book. I would recommend this book to ages ten through fifteen, because I think that age group would enjoy this the most.

A lizard explodes into bits.
KEYWORDS