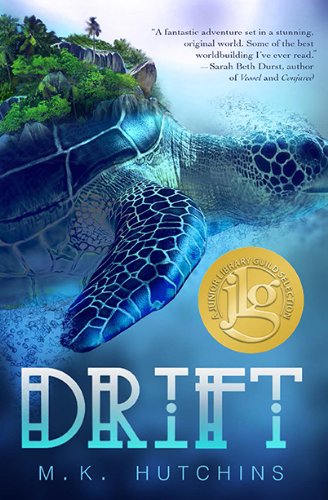 For Tenjat, a young refugee from a hostile Turtle Island, Ceibak would only ever be a myth, a fairytale told to children to dull the shame of becoming a farmer. Tenjat doesn’t want to be a farmer and hub, but a Handler—a protector of the island. He doesn’t waste time on the fairytale nonsense of a world where food is bountiful and danger nonexistent when he has to provide for his younger sister.  When Tenjat finally begins his training to become a Handler, he never wants to hear about Ceibak again, but isn’t so lucky. As Tenjat trains and learns more about the beginnings of the Turtle Islands and the Naga monsters, he isn’t so sure that what he used to believe is true. Untimely, Tenjat is faced with a decision that will save his island or doom it.

A dangerous and thrilling world, Hutchins creates in Drift a novel that’s sure to transport you by the first chapter! Absolutely worthy of the award bestowed upon it—I give Drift 5 out of 5 stars!

Cleverly put together, Hutchins gives birth to not only a thrilling story but a magical world, intriguing characters, and nice big ‘ol pot of “thinking noodle soup”!

Artfully crafted, Hutchins’s characters hit the nail on the head. Each one had sufficient motivation, growth, and closure. Each character accelerated the plot and gave their own opinions on it as it progressed, through not only words but actions committed and omitted. Every element of the book was placed there for a reason to be revealed at the end. With the plot itself, Hutchins could not have done a better job.

Simply scrumptious for an avid fantasy lover, Hutchins handsomely whipped together seeming incompatible elements and made them into a breathtaking world.  Tenjat’s world feels real and draws you in. Everything wielded together from characters to plot to description. Particularly the amount of the thought that went into this book was astounding.

Strong themes run rampart, and parallels to the world we live in today can be found.  This novel doesn’t contain the usual requirements to gain entry in “Mature Rating Club.” No sign of vulgarity or mature material here, only "thinking noodle soup" for the reader. Know that if you read this novel, be prepared to look deeper and to expect food for thought. Each one of us could learn a little something from the story Tenjat’s little Turtle Island and the people on it.

I am unbelievably impressed with Drift and will re-read it in the future. I hope to see more work from Hutchins, as I thoroughly enjoyed her debut novel, Drift.