And in the Morning review by ReesaOnFire 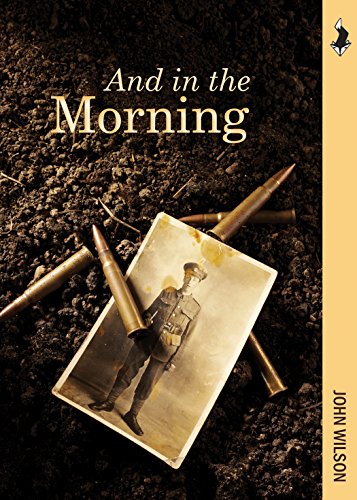 Young Jim Hay dreams of joining the Great War. To fight for his country would be the greatest honor, to prove himself as a man in such a noble fight is his desire. War and fighting seem more noble and pure in his hometown rather than horrendous. After the deaths of his father and mother, nothing stops Jim from joining the war and experiencing the horrors of trench warfare.  War is painted differently in textbooks, letters and newspapers in And in the Morning. By Jim Hays - soldier of the 2nd City Battalion 16th Highland Light Infantry F company - first hand account the war is something not even he could have imagined.

Told through a series of diary entries and letters sent and unsent And in the Morning seizes the reader’s mind and soul as we relive every moment of Jim’s life since the beginning of the Great War (World War I).

Author John Wilson tells a fantastic story.  His research on real letters, diaries and lives of soldiers in the Great War made the story heartbreakingly true as it followed historical events precisely, while his tone and syntax in Jim Hay’s diary entries build a personal bridge for the reader to cross into the horrendous war.

The hardships and humanity of the Great War are too easily forgotten in our modern world. And in the Morning is a unique historical fiction novel which portrays the life of the amateur solider in a gentle, heart breaking way.

When reading about the World Wars, there is always an impact. The nature of that particular period in our world’s history is so overwhelming it is nearly impossible to read something about or from that period and not be affected. And in the Morning  is both a historical book on the war giving vivid descriptions and opinions of the time and the fictional first hand account of Jim Hay.  In short, the book was highly effective in its aim  to draw close the reader as it created the perfect looking glass to gaze at the period. The fact that it included letters written from Hay that had both been sent and unsent allows the reader to feel as though he or she is personally there, receiving his letters.

Also notable is Wilson's superb job at maintaining a balance when describing the horrors of war; he did not write in a way that was too explicit for a wide viewership but did not lose the essence of the actions of the time period.  In short, And in the Morning presented a tasteful way of depicting the war while conserving its brutality.

Wilson creates a relatable gateway for young readers to learn about a period of trial in our world’s history through his choice to compile these entries from young Hay. I enjoyed And in the Morning and recommend it for readers aged 15 and up.

Descriptions of war violence, suggestive themes. Jim Hay goes through a traumatic experience which causes severe PTSD. One instance of implied sexual content. A warning: in the book there are at least two instances of court-martial cases, both of which result in public execution. Recommended for ages 15 and up due to the nature of World War I.
KEYWORDS