And The Children Shall Lead (The Lance Chronicles ... 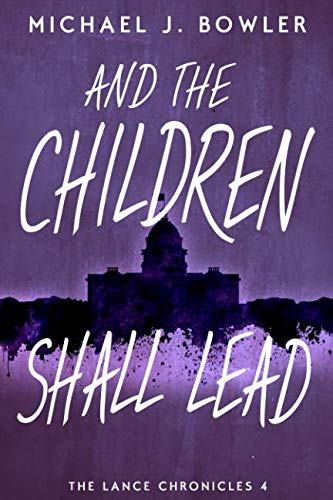 With the people’s votes in and the fate of their proposition decided, Arthur and his knights return for book four of The Lance Chronicles: And the Children Shall Lead. After concluding the first major phase of their plan to gain the children of America more rights, the knights are proud of what they have accomplished thus far. Despite this, they are far from finished with their end goal. The heroes are ready to step things up a notch, and what method could be better and more effective than amending the United States constitution? Lance and Ricky had announced their audacious plan to amend the United States constitution at the close of the last book, and now the reader joins them as they plot to put that plan in motion.

The children work furiously, putting the finishing touches on their “Children’s Bill of Rights.” Finally, they are ready, and the pair present their bill to the public. As expected, the reactions to their document are mixed, with some deciding that their proposal is outright ridiculous and others believing that these amendments are indeed necessary. In spite of the relatively minimal acceptance of their document, the kids have gotten people talking and are ready to return home in triumph.

As they walk back to the car, a massive speaker starts to fall over right in Lance’s path. If Ricky did not pull Lance out of its way, he surely would have been killed. Even though the suspect in the previous attempts on Lance’s life died, no one believes this was simply an accident. The group races home, but suddenly Lance receives a text from a blocked number. The anonymous person claims responsibility for the speaker’s fall and promises to finish the job and kill him, Ricky, and the Round Table’s entire crusade. With this new threat facing Lance and the rest of New Camelot, how can they possibly convince the public about the importance of their Children’s Bill of Rights, while at the same time staying safe? Will this new attacker succeed in his threats against Lance?

And the Children Shall Lead was another great addition to The Lance Chronicles series. Even so, it did seem to start off much slower than the previous three installments and took a while to get off its feet. Luckily, once it did take off, its plot didn’t stop running and had some amazingly emotion-filled action scenes. These scenes, in addition to others, made it easy to identify with each of the characters. It is remarkable how Michael J. Bowler is able to bring out the humanity in each of his characters, making them that much more believable.

Beyond the book’s slow start, I do hold a few more qualms about it. First, I thought the resolution to book three’s epilogue was rather boring, and I think that it could have been resolved in a much more exciting fashion; I think this was one of the main contributors to the book’s slow beginning. The other problem I had was that it didn’t seem like some of the children’s proposals were thought out as well as they could have been. Although at first glance they sounded great, at least one of them seemed as if it would have quite a few repercussions (beyond what the book appeared to acknowledge). This fact was relatively easy to overlook, though.

Other than some minor logistic issues and the somewhat sluggish start, The Lance Chronicles remains a tremendously exciting and thoroughly thought-provoking series for teens and adults alike. I’m eager to read the fifth and final book in the series to see how everything gets resolved.

There is a minor focus on sexual abuse (although less so than the previous installments), some language, and talk of children having sexual relations (although it never actually occurs).
KEYWORDS