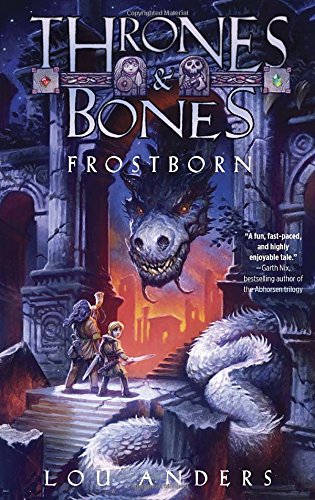 Thrones and Bones: Frostborn is a book about a boy named Karn and a frost giant girl named Thianna.  Karn is a human farm boy who would rather play games all day than work on the farm.  Thianna is a frost giant who is half human because her frost giant dad married a human woman.  She despises her human half.  One day, her father gets tired of her hating her human half, so to help her feel closer to her mother, he makes her carry around a horn that her mother gave him when she died.

Karn and Thianna meet when Karn's village and Thianna's tribe go to a place called Dragon Dance to trade.  Karn and Thianna become fast friends, but soon the time comes to leave.  Karn asks his uncle Ori if he knows where Thianna went, so he can say good-bye.  His uncle tells him she was going to wait for him at the barrow mound (a barrow mound is their version of a grave) they had found together, and that he would accompany Karn there.  While looking for Thianna, he and his uncle run into major trouble with an undead After Walker called Helltoppr, and Karn winds up losing his father.  Karn runs into the wilderness to escape Helltoppr.

Meanwhile, Thianna can’t find Karn, so she travels back home with her tribe.  When they get there, they discover three mysterious women from her mother’s past who are looking for Thianna’s mother’s horn.  To protect her tribe, Thianna runs away into the wilderness with the horn.  Out of pure chance, Thianna and Karn find each other in the wilderness running from their own dangers.  They decide to stick together because there is safety in numbers.  Will Helltoppr’s minions catch up to Karn?  Will Karn find a way to get his father back?  Will Thianna ever find out what the horn does?  Follow Thianna and Karn’s amazing adventure to find out!

I really liked Thrones and Bones: Frostborn.  It was very thrilling,  adventurous, and funny.  It was also fairly descriptive, like when the author, Lou Anders, described Helltoppr's draug minions as smelly, rotting, undead beings.  One of my favorite parts in the book was where Karn and Thianna faced the dragon, Orm, and they outsmarted him.  This book didn't really feel like it had any bad parts to it, other than a few very minor parts where it confused me a bit.  My favorite character was Karn because he was a boy who always wanted to go adventuring to explore lands near and far.  I would recommend this book to anyone aged eleven through seventeen or to readers who enjoy books with action, suspense, and excitement, yet can also handle a minimal amount of death.

A small amount of death and men drinking.
KEYWORDS