I’ve been writing on and off as long as I remember. As a kid, I drew comic strips and comic books (mostly about Batman and Spider-Man). Then in high school I discovered I could hand in short stories in place of essays if I didn’t do it too often. I took creative writing courses in college, and later, I wrote plays in Chicago, and a few screenplays and hundreds of magazine articles in Hollywood.  But in 1999, I went to work as an editor and for a long period of time I stopped producing my own fiction. Then one day, a good friend (and great author) named George Mann asked me to write a short story for an anthology he was doing. The short was really hard, and I kept asking him for more and more time. He was fine with it, and after a while I started to wonder why he was so lax about the deadline. But I finished the story and handed it in. Only then did he tell me that the anthology had been canceled. My split second reaction was, “You jerk, if you’d told me that I never would have written the story.” And then instantly, “Oh, right.”  George then encouraged me to turn the short into a novel. And I did. That manuscript wasn’t Frostborn, but it got me an agent and it’s how I started writing novel length works.

When I was a young, my father would read aloud to the whole family. He read us the Chronicles of Narnia and The Hobbit over and over. Then, when I was a little older, he bought a copy of Edgar Rice Burroughs A Princess of Mars and pretty much ordered me to read it. I was hesitant at first, but I ended up reading everything by Burroughs I could get my hands on over the next two years. I graduated fairly quickly to Robert E. Howard and Fritz Leiber. Then I fell madly in love with the multiverse of Michael Moorcock’s fantasy tales. These days, I’m inspired by J. K. Rowling, Neil Gaiman, John Flanagan, and a writer I’ve had the privilege to edit myself named James Enge. I didn’t discover Lloyd Alexander until after I’d written Frostborn, but I have drawn so many favorable comparisons to him that I recently started reading The Chronicles of Prydain, and I’m loving it.

I love fantasy landscapes and imaginary cities. I love pouring over maps, and I’ve spent hours studying Middle Earth. I also played Dungeons & Dragons as a tween. I had a huge poster map of their campaign setting, The World of Greyhawk. My mother laminated it to an enormous piece of plywood and we’d cart it in the station wagon over to whoever’s house we were playing at that weekend. We didn’t really need it, but having that giant map set up in front of us made it all real. I’ve never gotten over that fascination with faraway places.

Once you have crossed the desert sands to catch a glimpse of a lost city of gold or seen sunken R'lyeh rise from the ocean, you will always feel the call.

Start immediately. Write all you can. Your first effort will be terrible. You may not realize it, but trust me on this. But don’t quit. Your second effort will also be terrible, but slightly less so. Your third will be bad, but not quite so terrible. Your fourth, just okay. You see where this is going? Writing and imagination are muscles, and they get stronger by being exercised. No one should expect to play Rachmaninoff the first time they sit down at the piano, but if you practice, practice, practice, you’ll get there. The sooner you start the journey, the sooner you’ll arrive. Though, of course, the journey never ends.

I wrote Frostborn at the kitchen counter. It was mostly written from 9pm to 1am, Monday through Thursday night, when everything was dark and still. A bit of it was written at Starbucks, though, so that’s my second favorite place. I have an office downstairs, but I use it for other things—mostly for looking at art on a big screen, but the kitchen counter is where my muse hangs out.

First, I’ve talked a lot about maps. Please go see the beautiful maps (by cartographer Robert Lazzaretti) on the Thrones and Bones website. Only one of them is in the book, in black and white, but online there are two in glorious color. The website also has unique character art and a game. Games are a big part of the Thrones and Bones series. Frostborn has rules for a playable board game in the appendices, and the second book, Nightborn, will have another. And I’m at work on several other types of games that tie-in with the world of the books.

Second, looking over my responses to your questions, I see how instrumental other people were in getting me here, among them my parents and friends who encouraged me to read and to write. I have a good friend who doesn’t read to his child and consequently, his child doesn’t read. This breaks my heart, and it fills me with gratitude for the people who worked to instill a love of the written word in me. Reading may seem like a solitary activity, but really everyone who loves to read does so because someone in their past encouraged them.

Lou, thank you for joining LitPick for six minutes! You are the first author we’ve interviewed who has created rules for a playable board game to go along with their book!

Lou Anders's research on Norse mythology while writing Frostborn turned into a love affair with Viking culture and a first visit to Norway. He hopes the series will appeal to boys and girls equally. Anders is the recipient of a Hugo Award for editing and a Chesley Award for art direction. He has published over 500 articles and stories on science fiction and fantasy television and literature. Frostborn, which Publishers Weekly described as "thoroughly enjoyable" (starred review), is his first middle grade novel. A prolific speaker, Anders regularly attends writing conventions around the country. He and his family reside in Birmingham, Alabama. You can visit Anders online at louanders.com and ThronesandBones.com, on Facebook, and on Twitter at @ThronesandBones. 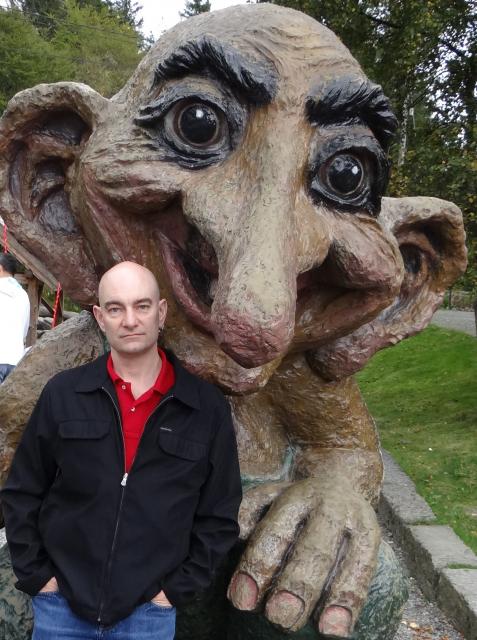