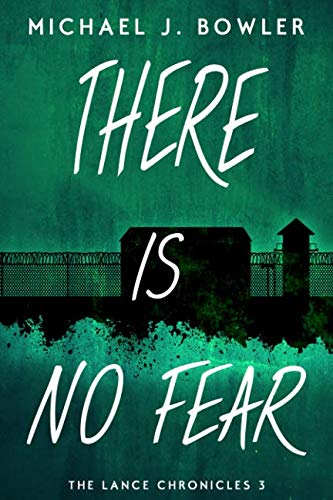 After finally receiving enough signatures to get their proposition on the ballot, King Arthur and the rest of the knights are back in There Is No Fear. In the last book, the knights were ready to move forward with their plans to gain children more rights. Unfortunately, a wrench was thrown in their plans at the unexpected arrival of a squad of police at New Camelot. Claiming that he was the main suspect in an attempted murder case, they grabbed Lance and carted him off to the police station, leaving his bewildered family behind.

Now, Lance is taken into police custody for questioning about the attempted murder. Not even knowing who it is that the police think he attacked, Lance is astonished to find that it is Richard! Not only was Richard the man that Lance had met at the park the previous night, but he was also the same man who had abused Lance at six years old! After some questioning, that information, coupled with the threat he had issued to Richard, was enough for the police to arrest him. He is taken to the Los Angeles juvenile detention center and placed in a cell.

Alas, due to Lance’s celebrity status as “The Boy Who Came Back,” the media is all too happy to coin him a villain, thus endangering the knight’s crusade. Arthur and the Knights of the Round Table must work quickly to prove Lance’s innocence, while at the same time continuing their campaign for children’s rights. Who could have attacked Richard and committed such a heinous crime? Is it possible that it was done in an attempt to frame Lance and put an end to the knight’s campaign? With seemingly everyone against them, can Arthur’s new Round Table beat the odds and get enough votes to pass their proposition?

Once again, Michael J. Bowler creates a well-written masterpiece in There Is No Fear. The third installment of The Lance Chronicles remains just as action-packed and suspenseful, if not more so, than its predecessors. I continue to be amazed by the incredibly realistic world and characters the author has created, and I tremendously enjoy feeling like a part of the action. It has been clear from book one that the aspect of Mr. Bowler’s writing that shines the brightest is his ability to make his characters and their world stunningly realistic. From the utter humiliation of juvenile hall life that Lance feels, to the nerve-wracking experience of speaking in front of huge crowds and on live television, Mr. Bowler does an amazing job making it feel real.

The world these characters occupy is no exception to this feeling of realism. Despite the fact that his story is set in the real world, he finds a way to make every detail of that world his own. Every scene seems expertly crafted, from the sumptuous New Camelot, to the harsh backstreets of Los Angeles. Another thing that's apparent is the amount of research that must have gone into writing this book. The court scenes seemed as if they truly could have happened and used a professional level of legislative procedure. This also assists in keeping the story’s flow constant, never letting the book get truly boring.

I do feel like I should reissue the same warning I gave for the last book, in that the series includes many controversial themes. These include some prominent characters being gay and the fact that Arthur’s knights are advocating for many adult rights to be applied to children. As long as the reader keeps an open mind, this series makes for an extremely enjoyable read.

As in the previous two books, there is a theme of sexual abuse that haunts some of the characters, although it isn't quite as common in this book. On the other hand, there are some threats made and some rather violent attacks carried out (the attacks themselves aren't pictured, but they are described after the fact as having been quite bloody and vicious). Also, there is some mild language and the mention of boys having to shower under the watchful eye of juvenile hall probation staff.
KEYWORDS