Running Through A Dark Place (The Lance Chronicles... 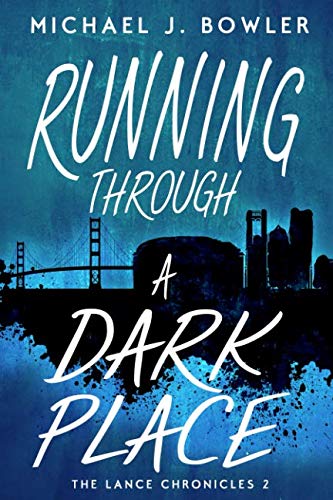 King Arthur and all the knights of his new Round Table return in Running Through a Dark Place, book two of the Lance Chronicles. Starting off right where book one ended, King Arthur and the rest of his knights mourn the loss of their friend, Lance Sepulveda. The vast crowd of Los Angeles residents remains outside City Hall and mourns with them. After Lance saved King Arthur from a sniper, he died in the arms of the miserable king. Not knowing how he can possibly continue his quest to further the rights of children without Lance by his side, Arthur is all but ready to give up hope. His despair continues as he is cryptically asked to accompany Lance’s body by the paramedic. Arthur does as he is told and gets into the ambulance, accompanied by Lance’s best friend, Jack.

The vehicle begins to drive off, but not minutes later the driver stops on the opposite side of City Hall and rushes his surprised passengers back outside. With only the cryptic explanation, “Hurry, King Arthur, before it’s too late.” The mysterious paramedic grabs Lance’s stretcher and hurries into the building, with Arthur and Jack in tow. Finally, the paramedic stops in a room and reveals himself as Arthur’s old friend, Merlin. He explains to the confused pair that he has the power to bring Lance back to life, as long as they can find someone to agree to take Lance’s place in death. With no time to spare, they find a willing volunteer, and Lance is brought back to life!

After making a grand reappearance on the front steps of City Hall, the crowd looks at Lance in awe. Having just died less than an hour prior, and on live TV no less, it’s an understatement to say that this event will have a lasting effect on the entire world. Lance’s life changes instantly as he becomes the most famous person on Earth. Although this publicity seems to be beneficial to the knights’ crusade, the question is, will fourteen-year-old Lance be able to handle the pressure? Even if he can, is it possible that Arthur and his knights will overcome all their obstacles and complete their crusade?

Running Through a Dark Place was a fast-paced book that incorporated lots of action throughout. I thoroughly enjoyed it, and in fact, I think Michael J. Bowler succeeded in making book two even more exciting than book one. There was more action, and the characters seemed better developed. Even further, the book had very few spots, if any, that contained too much unnecessary information, as was sometimes the case in book one. I was also very impressed that the author was able to infuse his book with the emotions that he did; when the characters were mourning Lance, or other fellow knights, I could tangibly feel their emotions.

One more thing that was really nice was that the author included a quick summary of the first book prior to the start of this one. Because of this, the storyline can be easily followed, even by those who haven’t read the first installment. Although I loved this book tremendously, I feel I should give potential readers a quick warning. In order to enjoy this book, a reader should have an open mind because it includes many controversial themes, such as children questioning whether they are gay. This book did seem slightly more mature than its predecessor, so I would recommend it to anyone 14 and up who enjoys action-filled stories that depict children picking up the reigns and bettering society.

As this book's title suggests, some of its characters are going through a dark time in their lives. As such, some of them (including one fairly prominent character) turn to alcohol and partying to cope. In addition, the theme of sexual abuse runs through this book even more prominently than in the previous one (although it still isn't explicitly depicted), and there is a fair bit of milder language.
KEYWORDS