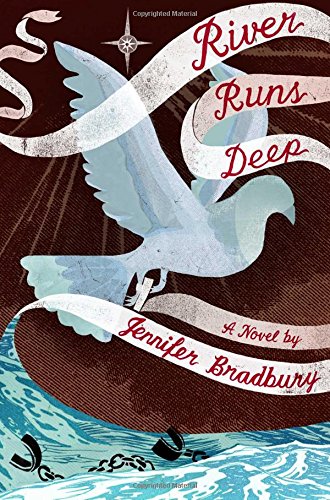 Elias is a 12 year boy who is sick with a dreadful disease called consumption. He is moved to an underground place called Mammoth Cave, where there are healing vapors. At Mammoth Cave, Elias is under the care of Doc Croghan. The cave consists of paths, valleys, and rooms, and has blind fish, rivers and seemingly bottomless pits. During his time in the cave, Elias meets Stephen, who is Doc Croghan's slave. He discovers a secret about Stephen.

Later, Elias secretly follows Stephen to a place he's never been. On this adventure, he discovers a secret so huge he has to risk his life to protect it. Does Doc Croghan know about the secret? Find out in River Runs Deep!

This is an excellent book. I would recommend it for fourth through sixth graders. The characters' choices and the adventure in this book's plot kept me on the edge of my seat wondering what would happen next. One of my favorite parts was when Nick and Elias were hiding behind a rock at Smiley Pit trying to fight off a band of pirates. Nick and Elias made all the Pirates throw their weapons into a huge pit.

This is a great book for readers of any age who wants to learn more about history and who love adventure and suspense. The stories and situations are historically appropriate and interesting.  Thank you Jennifer Bradbury for writing an excellent book for young readers!

Read more reviews by this Litpick Book Reviewer: emmasnyder
Recommend this book and review to your friends on Facebook