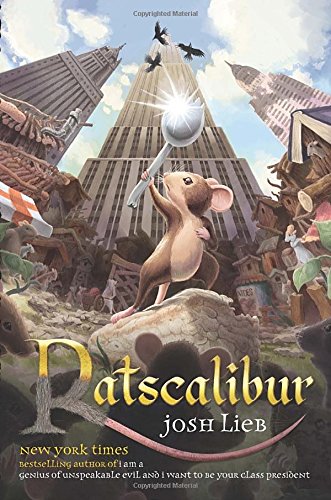 Ratscalibur is a book about an eleven-year-old boy named Joey.  Joey and his mom have just moved to the city from their house in the country.  Joey knows his mom took the job in the city and moved there for him, but Joey still wishes he were back in his old house with his friends.  Here he has no friends, and, since it's a big city, that equals the fact that it stinks.  Also, there are rats everywhere.  After he and his mom finish unpacking some of their stuff, Joey's uncle Patrick comes over for a visit.  He brings Joey a package to help him adjust to leaving his friends. To Joey's surprise, it's a pet rat!  Joey thinks that it's a weird pet, but knows it's the best he's going to get, and accepts it.  Joey soon finds out that there is something very special about his rat; it can talk!  Gondorff, as the rat calls himself, gives Joey a mission to bring a message to the rat king.  To enable Joey to undertake this dangerous mission, Gondorff turns Joey into a rat to carry out his plea.  Tasked with Gondorff's request, Joey seeks out the rat king.  Will Joey find the rat king?  Will his mission be successful?  And what is Ratscalibur?  Find out in Ratscalibur!

Ratscalibur was a great book.  I really liked how detailed the characters were.  Also, I liked how much imagination was put into the book; for example, the author added something called Ragic, which is the rat equivalent of magic.  One of the parts I found funny in this book was when one of the rats that Joey met took Joey to a “restaurant” and ordered a stew for him.  After Joey tried the stew, he asked the other rat what was in it.  The reply was, “You do plan on being human again, don’t you?”  When Joey said yes, the rat replied, “Then you probably don’t want to know.  It might turn out to haunt you later.”  One of the only things that I didn’t like about this book was that it was too short.  If it was longer I would have liked it even better!  I would recommend Ratscalibur to anyone who enjoys funny yet adventurous books.  I am giving this book a well-deserved five stars.

There were some rats killing other rats.
KEYWORDS