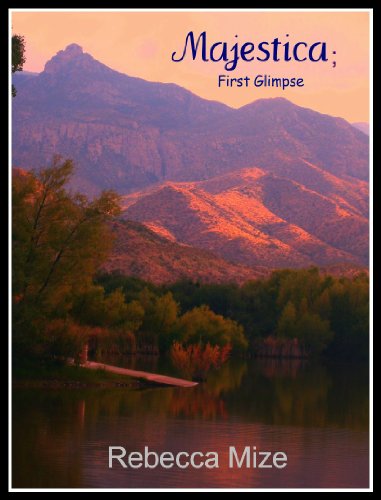 After nearly falling off of a cliff Lacey meets Jace, a dangerous boy who lives in the mountains. Lacey knows that the people of the mountains are nothing but trouble, everyone in her small town says so. People go up on the Tribal Mountain land camping or hiking and they never return-- they disappear.  When Lacey is saved by Jace, a young tribesman, she forgets all of the warnings.  She falls in love with him. As Lacey and Jace grow closer, she discovers that the Mountain Tribes aren’t what they seem and the disappearing and the tribes are a part of something much bigger than her small town in Alaska. That something might be even bigger than her whole world.  As Lacey is led deeper into the Majestic mystery, she realizes that the hate and turmoil Majestica brought might end everything she loves. Is she strong enough to protect Jace and her town? Or just one of them?

I thoroughly enjoyed this “Chick Flick” turned science fiction-fantasy. I couldn't predict what would happen and had to read every detail. Mize did a wonderful job of creating not only a plot, but also ideal characters, realistic situations, and hints for a sequel (for example, whenever Mize mentions Jace’s older Brother).

The only compliant I have about the book is the slow middle. It felt like in the middle Mize put in a few “filler” chapters full of fluff—chapters that had nothing to do with the central story. But the reader will quickly forgive Mize for these “fillers” as she dramatically brings Jace’s past and future into the story. She weaves together betrayal, allies, enemies, and green eyed monsters.  She lets Lacey and the reader find out that Jace isn’t just a normal Tribesman.

Anyone who enjoys a good science-fiction or fantasy story with a wave of romance will love this book. They might get a little frustrated with a few ‘filler’ chapters toward the middle, but if they stick to it they will be rewarded with a great end.