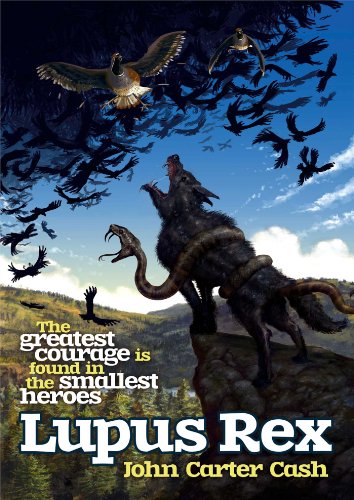 Lupus Rex is a book about many different animals living in the "Murder's Field,” under the command of the Crows.  The crows follow the rules that have been around forever.  One day, the crow king dies. The high crows must choose which son is fit to be king.  The oldest of the king’s three sons, Sintus, feels he’s meant to be king.  In order to keep the choice secret, the high crows kick all the animals except the crows out of the field so they can select the next king. After much discussion, the youngest son is found unworthy and is killed right away.  Sintus, the oldest, runs away after learning he was found unworthy, also.

Meanwhile, some quail, who were secretly watching the choosing, are told by the grandfather quail that a wolf is coming to take over the entire forest.  They go on a quest to find the hawk, and to get him to protect them.  In the end, a final battle ensues between the wolf, the hawk, and two factions of crows.  Find out who wins the battle in this imaginative tale!

I really liked Lupus Rex.  It was very descriptive, although it didn’t catch my attention right away and was a little confusing.  About thirty pages in, though, it started to get interesting.  My favorite character was Ysil the quail, who is trying to follow his grandfather’s last request.  I also liked  Gomor the rabbit, who gave his life for his friends.  I would recommend this book to ages 11 through 15 because there are a lot of grisly parts (even though they’re just animals) and it is confusing. I don’t think most kids over 15 would be interested in reading this, although if they liked the Redwall Series, this might be right up their alley.

Lots of killing of different animals, lots of animals being hurt, and some bad words.
KEYWORDS