Liberty Frye and the Sails of Fate (series, Book T... 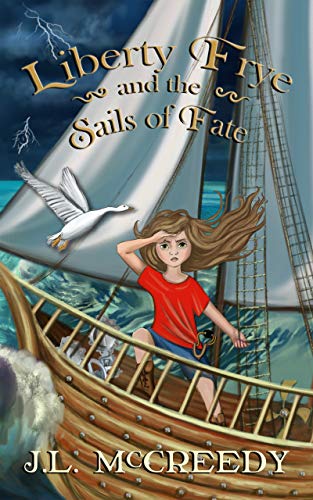 Liberty Frye and the Sails of Fate is the continuing story of the young witch named Liberty Frye. It is now her eleventh birthday, and her magic is getting stronger than ever. Her parents are taking her on a birthday trip down to the bay, but this is no ordinary trip. Libby knows that if her birthday is anything like last year, extraordinarily strange things will happen with her powers that she can't control.

They meet Libby's Uncle Frank at the bay, where Libby discovers a huge surprise waiting for her. There sits an enormous ship owned by none other than her Uncle Frank! What's more, they will be touring the bay in it! Instead of going on the boat ride, her parents leave to pick up supplies for the picnic they will be having later. Meanwhile, Libby, Ginny, and Uncle Frank start the tour.

After the ship starts moving, Uncle Frank takes her below deck to show her another birthday surprise. He has made a new invention to teleport her birthday present to the other side of the bay where they'll pick it up. He activates the device, only to have something go terribly wrong. It leaves the device in tatters, and nobody knows where they are.

What happened to the device, and why has everything gone black? In a strange place, with dark forces and angry islanders after them, how are they going to find their way back home?

I really liked Liberty Frye and the Sails of Fate. It did not disappoint and was just as exciting as the first book. The author, J. L. McCreedy, masterfully crafted a book full of action, adventure, and suspense that commanded my attention from beginning to end.

The descriptions were also outstanding; they made me feel as though I was experiencing the journey for myself. Just one example of the detailed descriptions was, “Uncle Frank saw something just as incredible outside, because now, that electric blue cloud pulsed and throbbed with renewed energy until suddenly, the cloud burst apart like a million shooting blue stars, each star falling directly from the sky...”

The themes of family and friendship were woven throughout this book. I could relate to the characters; they were believable and felt very realistic. I would recommend this book to ages 12 and up or to anyone who has read and enjoyed book one, Liberty Frye and the Witches of Hessen.

There are some almost nude ladies.
KEYWORDS