If You Find Me review by speedreader789 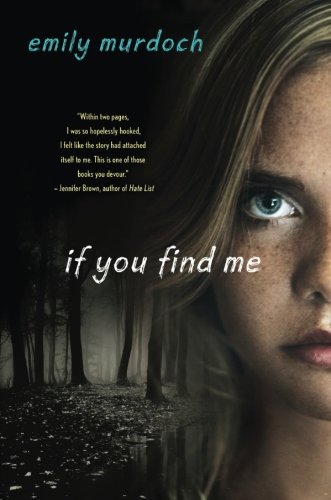 The book If you Find me by Emily Murdoch is about two girls who spent the better part of their life living in the woods with their mother.  When their mother leaves and does not come back, the eldest girl, Carrey, is forced to take care of her younger sister, Jenessa on her own.  Then, after a few months their father finds them and takes them home with him.  The girls have the new challenge of adjusting to their new life of a new stepsister, stepmother and father that Carey has always been told hurt her and Jenessa.  Carey tries to learn who she can trust with her secrets and how much of what she has always believed is a lie.

I thought that this book was very suspenseful and a book that is hard to put down after you have started it.   I think the best thing about the book is that you do not know what happened to the sisters before they were brought to their father’s home other than that they were raised in the woods by their mother who has left.  Given the context clues you can assume that they had very little money but they are still very smart.  Throughout the story, the back ground is revealed through Carey’s flashbacks and some of the things that happened are not at all what you would expect. I also liked the setting change.  The girls go from a trailer in the woods to a farm in a rural area.  It is humorous to see how much we see as everyday concepts that they have no idea about such as a hamburger.  The characteristics of the main character in the book are intriguing.  They are developed throughout the flashbacks and the little things that Carey does.  Such as how Carey carries her violin everywhere throughout school.  This shows that she is very protective of some parts of her past even though there are other parts she makes obvious she despises.  If you would like to read a mystery with funny twists this is the book for you.

Read more reviews by this Litpick Book Reviewer: speedreader789
Recommend this book and review to your friends on Facebook