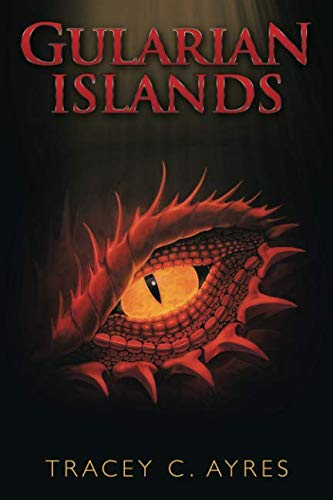 In Gularian Islands by Tracey C. Ayres, 14-year-old Ben Mason and his friends, Gary, Izzie, and Dolly, find themselves in an exciting, overwhelming adventure when the plane carrying them from the United States home to Australia crashes into the ocean near some islands. After the shock of the accident wears off, the passengers break into groups to look for supplies that can be used until they are rescued. At first, the exotic islands, cliffs, and cave tunnels are wonderful for the teens to explore, but then they notice strange things happening they can’t explain.

They start to realize they have a mystery to solve when they see a gigantic creature swimming and diving in the ocean. Everyone guesses what they think it is and begins to get scared, but Ben tells them it’s a silver dragon. He wants to look for her lair in the caves, and when they do, they find a nest of eggs. Ben senses they should leave them alone, but Gary secretly takes one. Not much later, Ben realizes Silver the dragon is not after them. She’s upset about her missing egg and is in danger herself because an evil dragon named Black Knight has kidnapped her mate, Goldevere. All of these dragons can take on a human form sometimes, so rescuing Goldevere and capturing Black Knight will be especially risky. The teens know they need extra help, but the more they see how the passengers interact with one another and the more creatures they meet along the way, the more they question whom they should trust. Every decision they make requires them to take a chance, so the book winds up being an imaginative thriller with surprises on every page.

Gularian Islands is fun to read because it blends the qualities of a fairy tale with elements from our own modern-day world. It’s easy to read and has great descriptions, which helped me feel like I was part of the adventure too. Several sub-plots make the story interesting and suspenseful. It’s impossible to guess what will happen next. With the exception of Ben who has a good heart and Black Knight who is evil, I constantly wondered if the characters and creatures would be trustworthy with each other through to the end. Anyone 12 and up who likes fast-paced fantasy would enjoy this story. Reading about a plane crash and the evil Black Knight might be scary for elementary-age kids, but I think teens would like all of the twists and turns of this book.