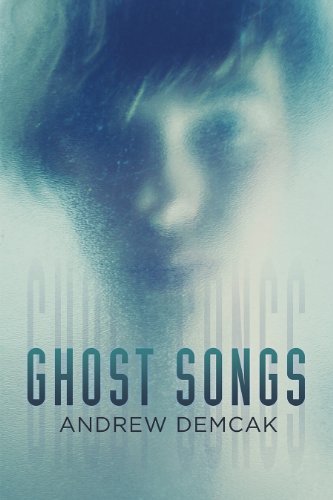 It is 1982 in Southern California, and fourteen-year-old musical prodigy, Todd Williams, is experiencing typical coming of age confusion, conflict, and distress. The otherworldly additions to these experiences, however, are hardly typical. Andrew Demcak’s novel, Ghost Songs, introduces themes of friendship, jealousy, trust, adulthood, abuse, parent-child relationships, and sexuality, all through the perspective of a young teen amid a paranormal plot.

While attempting to solve a mystery that will uncover a hidden treasure, as well as attempts to understand sporadic visits from a befriended ghost, Todd must sift through the harsh realities of having an alcoholic parent, being a closeted teen, experiencing bullying, and dealing with experiences such as rape. This story is set against the backdrop of a supernatural mystery, yet Todd’s story predominantly encapsulates the struggles of the often unrequited and irrational, as well as always conflicting, life of a teenager.

The time period that this book is set in (1982) provides a refreshing take on contemporary teen fiction, in which the reader is not bombarded with mentions of modern technology culture (such as social media). Demcak represents the era subtly, and rather than throwing the decade in the reader's face for the sake of historic interest, he skillfully incorporates it into the narration and conversations, providing a snapshot of the Palo Verdes Peninsula in the early 1980s that may be nostalgic for some and novel to others, yet could be enjoyable for both, regardless of age.

The paranormal elements implemented into this story feel similar to the Bailey School Kids books in terms of the enjoyable amount of spooky mystery present, only with more depth and dimension in regards to the emotional drama depicted. Ghost Songs seems to be intended for an older audience. This story has a young voice yet is filled with intensely mature subject matter.

Demcak’s narration is easy to follow and flows rather well. It’s simple, yet not lazy. The author’s idiosyncratic choices of punctuation as well as a straightforward voice creates a unique and distinct writing style that feels laid back and easy to experience and was likely intentionally constructed to give this impression. This casual realness feels intentionally reminiscent of classics like Catcher in the Rye and The Outsiders, two novels that happen to be mentioned in passing in this story. The narration feels artfully risque and relaxed, which could be dissuading to some or refreshingly candid to others. This reader ultimately found it to be the latter due to the intentionally frank execution of crude moments. The dialogue feels real, as if they were real teens talking, not edited to make them entirely eloquent in expression and grammar. This makes for a read with real characters that sound like real people from the moment that they start speaking. However, due to this feature of the text, it could be considered boring because the conversations and the protagonist’s thoughts did not always feel concise or relevant. The introspective and action-packed moments were respectively engaging but lacking in general and wedged in between various lackluster transitions and events that felt unnecessary to the plot.

Similarly, Demcak’s novel doesn’t seem to know what it wants to be; the plot fails to seamlessly combine both narratives (the dilemmas of being a teen versus a paranormal mystery and treasure hunt). The plot meanders in places because it is trying to go in several different directions all at once. This could be slightly testing for some readers, as the focus of this story feels fragmented.

Overall, the writing voice in Ghost Songs is unique, providing insightful observations that many could relate to or empathize with, while oversupplying mundane information in other instances that detracts from the plot and character development. While it can become dizzying and disinteresting to follow along, Demcak’s novel is ultimately worthwhile, providing a well-executed portrayal of hard-hitting yet arguably important topics to discuss that can be personally relevant to some readers and socially relevant regardless.

The strong language used, explicit mentions of sex, abuse, rape, drug-use, alcoholism, and violence might be considered best for mature readers only. This reader would recommend Ghost Songs for readers 16 and older, but it truly depends upon the maturity of the reader individually rather than their age.
KEYWORDS