Andrew Demcak
Andrew Demcak* is an American poet and novelist, the author of four poetry collections and five Young Adult novels. His books have been featured by The American Library Association, Verse Daily, The Lambda Literary Foundation, The Best American Poetry, and Poets and Writers. He was a *FINALIST* for the prestigious Dorset Poetry Prize, the Gloria E. Anzaldúa Poetry Prize, and the Louise Bogan Award for Artistic Merit and Excellence in Poetry.
He recently released two new YA/Teen GLBTQ2-S novels, How Do You Deal with a Dead Girl? (Big 23 Press, 2018), and Alpha Wave, The Elusive Spark series, Book 2, (Harmony Ink Press, 2018) to brisk sales. His newest YA/Teen GLBTQ2-S novel, Darkfeather, The Elusive Spark series, Book 3, (Harmony Ink Press, 2019) will be published next year.  About his Teen GLBTQ Sci-Fi Coming-Out novel, A Little Bit Langston, The Elusive Spark series, Book 1,  Kirkus Reviews raved "This book really ... takes its place in the marginalized-will-lead-us genre, as popularized by The Matrix and the X-Men franchises." His first Young Adult (YA) novel, Ghost Songs, was published March 13, 2014. His first literary novel, If There's A Heaven Above, was published January 5, 2013 by JMS Books, and was nominated by The American Library Association as an "Outstanding" novel for older Teens (17+). His first play, The Inevitable Crunch Factor, won the Cal Arts' New Playwrights Series and was cast and produced in a multi-week run. His fourth book of poetry, Night Chant, was published by Lethe Press. His other poetry books are: A Single Hurt Color, GOSS 183::Casa Menendez Press, 2010, Zero Summer, BlazeVOX [Books], NY, 2009 and his first poetry book, Catching Tigers in Red Weather, three candles press, 2007, which was selected by Joan Larkin to win the Three Candles Press Open Book Award.
He was a 2010 Finalist for The Crazyhorse Poetry Award. His work has been nominated for the Pushcart Prize, Lambda Award, Thom Gunn Poetry Award, both the California and Northern California Book Awards, Best of the Web, and others. He has an M. F. A. in English/Creative Writing from St. Mary's College in Moraga, CA , where he studied with Robert Hass, Brenda Hillman, Michael Palmer, Carol Snow, Frank Bidart, Gary Snyder, Charles Wright, and Sharon Olds. Andrew is also a member of the Squaw Valley Community of Writers, where he studied with Galway Kinnell, Richard Howard, and Lucille Clifton. His poems, including Young Man With iPod (Poetry Midwest, #13), are taught at Ohio State University as part of both its English 110.02 class, "The Genius and the Madman," and in its "American Poetry Since 1945" class. At the age of 23, Andrew published his first chapbook, The Psalms (Big 23 Press), which was favorably reviewed by Dr. Clifton Snider in the Small Press Review (issue 226, vol. 23, no. 11.)
*"Andrew Demcak." Contemporary Authors, Gale, 2017. Literature Resource Center, go.galegroup.com. Accessed 27 May 2017.

Joining LitPick today for Six Minutes with an Author is poet and novelist Andrew Demcak, author of Ghost Songs. Be sure to check out the video review of this title (http://bit.ly/LP-GhostSongs).

I've always been a good liar (ever since I was a little kid). Eventually, I discovered that writing and lying (storytelling) are very similar. Now I can use my storytelling powers for good, rather than try to convince my mother that I didn't break our neighbor's window.

The biggest influencers on my work are the poet, Anne Sexton (her Collected Poems is marvelous), Flannery O'Connor (I love her really gritty short stories, especially Good Country People), and Shirley Jackson (especially, We Have Always Lived in the Castle.)

Ghost Songs is my favorite book that I've written. It's very thinly veiled autobiography. But my favorite character that I've written right now is my teenage Yeti prince, Falling Star, from my upcoming novel, DarkFeather (Harmony Ink Press, 2019). I love paranormal stories and I love happy endings (because they happen so rarely in real life.)

Do what you love to do. If it's writing, don't let anything come between you and your work. I don't believe in criticism. If it's criticism, it is petty. I believe in editing. Editing assumes there is something of value worth reshaping. Throw out all advice and write your own rule book.

I write in the morning, so my east-facing desk in my bedroom on my new 27" iMac is my favorite place.

Art is a dialogue. The dialog between the artist and the audience is paramount. It's not about money, it's about connecting with an audience.

Andrew, thank you for inspiring others to have the courage to write their own rule book. May each voice be heard. 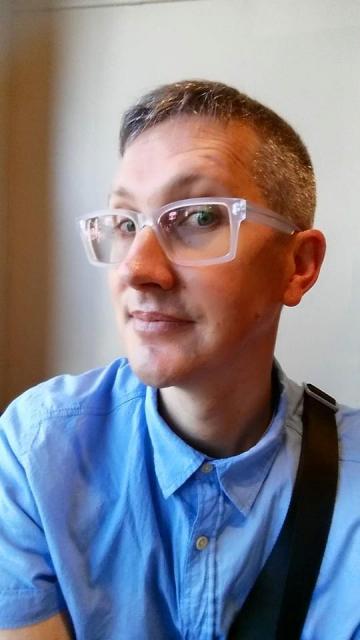