The First Principle review by Star360 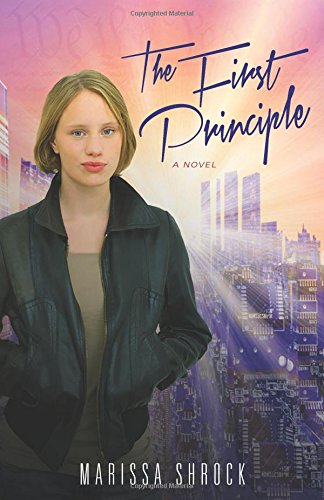 Intelligent sixteen-year-old Vivica Wilkins leads a privileged life in the United Regions of North America. Vivica is a blonde-haired blue-eyed model of political correctness. Her mother is running a successful campaign for presidency and she has a house full of servants. She's even making money on the side by hacking into the school database and changing ailing grades. Her last relationship was with a sweet boy named Ben. It recently ended, but life goes on, right? Wrong. Vivica finds out she’s pregnant. The next step seems obvious to her – she has to terminate. After all, the government’s Population Management has mandated that teenagers and women who have had two children must terminate their pregnancies. When Ben finds out, he disagrees due to his Chrisitan principals. Vivica scoffs at him. She feels his Bible is wrong; the annotated government edition is the correct version. However, something tells her to explore all the possibilities available to her. When charismatic Drake offers her shelter with an underground organization that is dedicated to helping girls like her, she listens to him. Her rebellious decision sets her against her mother, friends, and the harsh doctrine she’s always followed. Will Vivica have the courage to fight for her child and her newfound beliefs?

The YA market is flooded with dystopias and sci-fi worlds, but The First Principle has tackled an issue not found in others: teenage pregnancy. It’s more realistic than child gladiators (The Hunger Games) or giant labyrinths (The Maze Runner). Its female heroine has no bow and arrow, but Vivica – what a delightful name! – fights a frighteningly realistic battle against her controlling government and against herself.  As for her futuristic world, I felt it lacked the exquisite descriptiveness of Harry Potter or Divergent. I was left wondering: What do people dress like? How's the food? What do the buildings look like? Yet it did have the essential information I needed to comprehend Vivica’s plight.

Also, I was thankful that there was no instant love between the characters. Ben and Vivica are introduced after they break up, and readers later learn that they were good friends before taking things further. The fact that they don’t get back together after she finds out she’s pregnant raises an interesting question: Should Vivica have to settle with Ben because of the result of one night? There is a possible love interest between Drake and Vivica that would be interesting to read about, but I’m glad that this book focused on her dealing with her pregnancy. As for the Christian message, it is obvious. Ben gives her a Bible, people pray, and Biblical lines are cited in the text. However, I didn’t feel it was overly "preachy." After all, issues like abortion and familial betrayal are universal. The First Principle would be popular among teen girls who love relatable characters and heart-pounding adventures.

Best for readers 13 and up since the plot hinges on teenage pregnancy and abortion. It has many references to the Bible and Christianity.
KEYWORDS