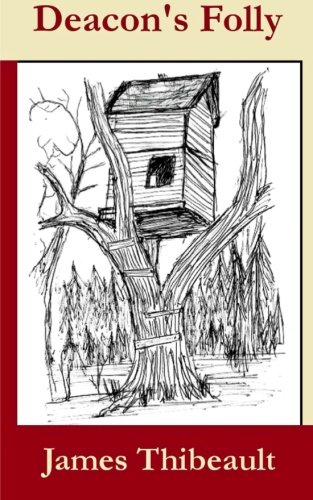 Deacon’s Folly is a book about 14-year-old Devon and his life in a very small town with some very mean people. He doesn’t know much; he doesn’t know his parents or even his last name. All he knows is that 6 years ago a man named Mr. Audette adopted him. He also knows that he is dreadfully dumb, but then again, everyone in the town knows that.

Everyone has labeled him dumb because of some things he has done, like accidentally ruining flowers and also nailing his hand to the treehouse. Mr. Audette thinks he is so senseless he won’t even let him come in the house! Devon sleeps in his treehouse and eats in his treehouse or outside. He isn’t even allowed to go to school, because people say he is too stupid to learn anything.

That has been Devon’s life for the past 6 years, but everything is about to change. He begins to hear voices in his head and have weird dreams. Could the new deacon in town have something to do with it? And are these (dare I say it) memories that he never knew he had?

I think the author, James Thibeault, had a good idea in Deacon’s Folly, but it didn’t quite live up to its full potential. The characters were fairly developed, but I felt like they all shared one personality instead of each having their own. If each character could have been unique, it would have been better. A lot of violent things began to happen a little past the middle of the book, which I didn't like. I did, however, enjoy the theme of perseverance that was woven throughout. All in all, I think this book had tons of possibilities, but it fell a little flat. I would suggest this book to ages 14 and up or to people who like books that take weird twists but end in a positive way.

There is lots of swearing, drinking, and violence. There are also a couple of deaths.
KEYWORDS