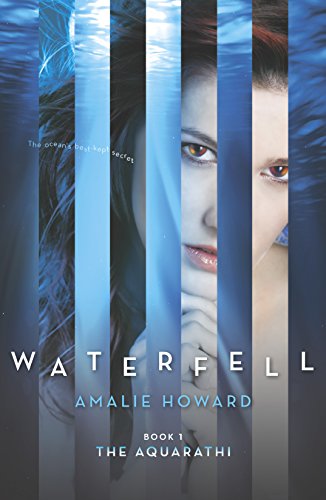 Waterfell
by Amalie Howard
Age Range - 12 and up
Genre - Paranormal

When Nerissa Marin, heir to the undersea kingdom of Waterfell, embarked on a four-year foray into human culture, she hardly expected her stay to turn permanent. But when her father's murdered for his throne, California's coastlines become Nerissa's only refuge. While the devious Ehmora, intent on assinating Nerissa and seizing political power, schemes below the water, young love unfolds above it; after a beachside encounter with captivating surfer boy Lo, he's all Nerissa can think about! But when a murderous mer-mutant assails her adoptive brother Speio, Nerissa knows it's time she took matters into her own hands. As Waterfell descends into anarchy, can our future queen reclaim her throne?

Throughout Waterfell, Howard excels in sculpting complex, dynamic characters who evoke both the readers' sympathy as well as their annoyance. Unlike the bulk of teen beach-reads, Waterfell doesn't rely on vague stereotypes of "good" and "evil" to distinguish its characters. Rather, Nerissa, her adoptive brother Speio, bestie Jenna, and crush Lo all flaunt the nuances and imperfections of real-world human beings. Unlike real-world human beings, however, Nerissa and Lo seem incapable of disagreeing. And as adorable as their impossibly flawless romance might be, in the absence of conflict, Nerissa and Lo never get the chance to prove their sincerity. Waterfell unfurls at a somewhat lurching pace, the plot alternating between cutthroat under-the-sea espionage and lackadaisical high school melodrama. Although simply worded, Howard's prose flows effortlessly as water, rendering Waterfell a quick, compulsively readable thriller.

There is language and sexual references.
KEYWORDS