Warriors From Beyond review by jotaf 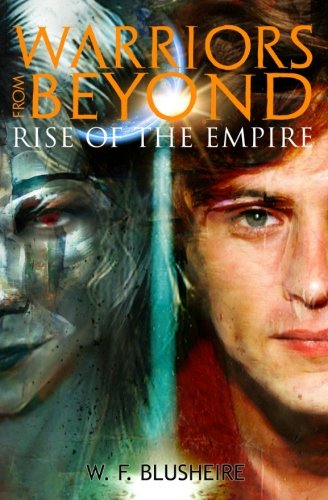 Warriors From Beyond
by W.F. Blusheire
Age Range - 12 and up
Genre - Fantasy

Warriors From Beyond: Rise of the Empire is a fantasy about Ruthro, Destine, and a group of children taken at birth from their parents and transformed into warriors.

Ruthro and his brother Destine were born to their parents with mana, a sort of telekinetic power.  Already outcasts because of their dark elf heritage, he and Destine are shunned by most people in the elf Kingdom of Aior.  Despite being told never to use their mana, they practice in secret, honing their skills to get better.  One day, their parents catch them practicing their skills and get mad.

Ruthro runs away to find the mythical vampire, Wizard Dorset, in the hopes of practicing his mana.  Weeks later, Ruthro comes back and preaches that the Kingdoms are being treated unfairly.  He forms a group of rebels to take down all of the Kingdoms.  When he succeeds, though, he turns out to be an even worse ruler than the other kings.

The three Fates, realizing that Ruthro is going to be a horrible dictator, take six babies and bestow upon them incredible powers.  Then the fates transport the six babies to a different world where they will grow up much quicker.  When they get old enough, they will have to battle Lord Ruthro.  Join these six brave warriors on their perilous journey!

Warriors From Beyond: Rise of the Empire wasn’t as good a book as I had hoped it would be.  There were a lot of things that confused me.  For example, one of the characters supposedly dies in the book, and not long after is up and about again.  I wasn’t exactly sure what to think about that.  Was she resurrected?  Was she not really dead?  I couldn’t figure out what the author was trying to convey.  In addition, a prophecy was told multiple times in which it was said that five warriors will save Beyond.  However, throughout most of the book, there are six warriors.  I think there was a really good idea behind the book, and the descriptions were fairly vivid, but I feel that it could have turned out better than it did.

I did like that there was lots of action which spiced the book up considerably.  I just wish that the parts of the book that didn’t have as much action lived up to that.  I would recommend this book to ages 13 and up.

There was lots of death, blood, and some bad words.
KEYWORDS