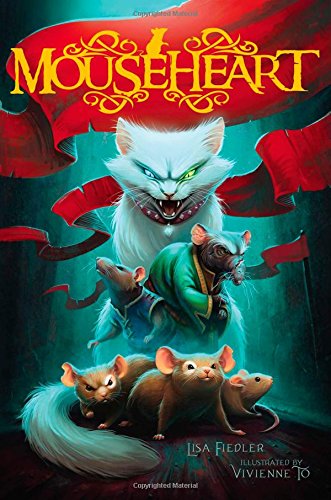 Mouseheart is a book about a mouse called Hopper who starts out as an ordinary pet shop mouse.  He escapes into the transit tunnels and encounters a rat called Zucker, who brings Hopper into Atlantia, an underground rat civilization .  He asks Zucker to find his family. Zucker guesses they are in the colonies for the captured and brainwashed captives and brings Hopper there.  Hopper finds Pup, his brother, but loses him when rebels attack.   In all the confusion, Hopper falls into a rebel tunnel and gets captured.  Surprisingly, he finds his sister there.  With Hopper and the MUS, which is a group of mice who want to take down the emperor of Atlantia, on the rebels side, the rebels fight the Atlantia citizens.  Which side is good?  Which side is not?  Who will win?  Find out in this thrilling book.

Mouseheart is an excellent book and I couldn’t put it down.  I cannot wait for the second book.  Lisa Fiedler created a world that is believable with an amount of fantasy which I loved.  Hopper is a mouse that is brave and unselfish in every way, and Pinky, his sister,  is foolhardy and reckless.  I would recommend this book for ages 9 and up because there are some bloody descriptions.  For the most part it is a thrilling book.  I think that everyone who reads this book will like it.  It will keep your attention and not let go!

There was some bloodshed and killing.
KEYWORDS