Meant To Be review by dancechicka 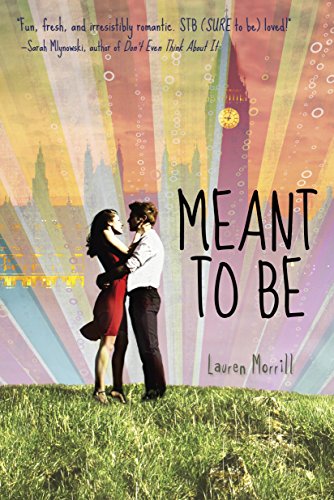 Sometimes the only way to find you destiny is by mistake.  Lauren Morrill’s new novel, Meant to Be, is proof of that. Straight-A extraordinaire Julia Lichtenstein is going to have the worst school trip in her life.  During the excursion, she is to be paired with the obnoxious Jason Lippincott, her nemesis since….well….forever.  She is not looking forward to careening around London with the most vile, disgusting, irresponsible being on earth.  Just as she expected, Jason proves to be nothing but trouble, from dragging her to wild parties to blackmailing her into writing his school papers.  Julia is livid, until she starts receiving texts from a secret admirer, who Jason assures he can find.  The catch?  Julia has to agree to relax along the way.  As in not worry.  Or study.  Or do anything legal at all.  Julia, who is desperate to find her aficionado, reluctantly agrees.  How much trouble can Jason Lippincott get them in trouble, anyway?

Turns out quite a bit.

As Julia and Jason bowl through London on a wild goose chase, the bond between them gets stronger and stronger.  Somewhere in between him singing her favorite Beatle’s song to making her laugh in awkward situations, Julia starts to think that maybe Jason isn’t so bad after all.  Maybe, beneath the immature jokes and impish smiles, there might be an endearing, fun guy under the surface.  Maybe Julia will be losing her heart along the way…….

“No.  No no no.  I cannot be with Jason Lippincott.  First of all, I told him to leave me alone.  Forever.  I can’t even look at Jason, much less tour castles with him.”

This book was amazing.  As you may already know, I’m a sucker for romance.  This book definitely had it, but it did so without being sappy.  The plot moved smoothly and effortlessly, with a new laughable scenario on every page.  I found Julia easy to connect with, from her hatred of Jason to her excitement over her romantic devotee.  Julia also had an interesting backstory and developed greatly over the course of the novel, keeping things edgy and interesting.  This book had plenty of action, for a romantic novel, and I especially loved the surprise twist at the end.  (Don’t you dare look!)  The only flaw in this book is that I felt that Julia obsessed over some pretty trivial things in this book, which made some parts move slowly.  All in all, I give this novel a five-star review!

“Jason is fantastic, and I’m mesmerized.  His voice cuts right through the London fog, and I’m glued to the bench, unable to take my eyes off him.”

I would recommend this book for ages fourteen and up, or for mature readers, because of the frequent profanity and sexual references.

So, as she sprints through the London streets, will Julia meet her man….or her match?  Read Meant to Be by Lauren Morrill to find out?

There is frequent cursing and sexual references.
KEYWORDS