The Maker review by jotaf 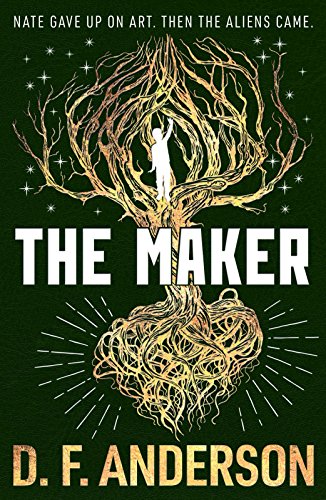 The Maker is a book about thirteen-year-old Nate Smith. Nate’s parents are divorced, and the last time he saw his dad was six months ago. He knows he hasn’t been forgotten, though, because about two months after his dad left, he was sent a binder to put his drawings in. Attached to it was a note, “Your father would want you to have this. Put the good ones in here.” That was the day the visions started.

These visions consist of the strangest things, such as a one-eyed jellyfish and some odd-looking trees. Each of these visions is so lifelike that he draws them, feeling as if they are a sign. One night, one such vision hits him. Like the others, he draws it and finishes it late at night. Bleary eyed, he opens his window for some fresh air and sees a very strange sight. He is looking at a tree. That might not seem too odd, but the only thing that should be out there is his empty driveway. This confuses him a lot, but what confuses him more is what comes next. Through his window come two little white fur balls. They steal his drawing binder and vanish, disappearing out the window. To what lengths will Nate go to get his binder back?

The Maker was very creatively written. I have never read a book with a concept quite like this before, and I think it worked out well. I did think it started out a little slow, and I was worried that it wouldn’t pick up, but I was wrong. It got exciting very quickly, and I found myself enjoying it immensely. Packed with action, a smoothly-flowing plot, and a unique setting, this book made for a read that kept me on the edge of my seat. The themes of friendship and bravery were predominant.  I do think that it could've been made a little bit longer, or even left us on a cliffhanger with the hopes of a book 2, but it was still very enjoyable. I would recommend this book to ages 9 and up. Those who enjoy fantasy and adventure books would also love this read.

There wasn't anything overly bad about this book, other than some fighting.
KEYWORDS