D.F. Anderson
I am the author of middle grade sci-fi novel THE MAKER, and the chapter book Tales of Tree City series, which includes CHARLIE SPARROW AND THE SECRET OF FLIGHT and CHARLIE SPARROW AND THE BOOK OF FLIGHT.
Besides writing, I enjoy spending time with my family, walking in nature, collecting records, reading, and travel.
I live in Ottawa, Canada's capital city, with my wife, daughter, and cat.​

Joining LitPick today for Six Minutes with an Author is D.F. Anderson, author of The Maker, which has received two Five Star Reviews from LitPick student reviewers.

Find out how he juggles working full time, writing, and being a dad.

When I was about 13 or so, I read a novel and decided "I can do that." I have been writing ever since. No idea where that thought came from!

***Who/what has influenced you?

My main creative influences include children's author Roald Dahl, sci-fi author Philip K. Dick, and (being a child of the 80s) the creative mind and worlds of Jim Henson (in particular his later movies, The Dark Crystal and Labyrinth).

My favorite books to read are a fairly mixed bag, from sci-fi/fantasy (most recently N. K. Jemisin's Broken Earth Trilogy and Frank Herbert's Dune) to more traditional literary fare, such as Jonathan Franzen's Motherless Brooklyn, Paul Auster's Book of Illusions and Haruki Marukami's 1Q84. In general, my tastes tend toward the weird.

If they asked, I would say: don't want to be an author, write something and be an author. I would probably add that it's really, really hard to write a book, so your whole heart has to be in it. If they didn't ask, I wouldn't say anything.

I will honestly write anywhere, and do, now that I have an iPhone with MS Word on it. I wrote all of my recent chapter book, Charlie Sparrow and the Book of Flight, on my iPhone. I prefer somewhere comfortable where I can focus, but that's a big ask when you have a 14-month-old daughter and work a day job. I fit writing in wherever and whenever I can.

2017 was a very busy year. My daughter was born in November 2016, so I was (and still am) learning to be a dad. I had a burst of creative energy that went along with having a daughter, and as a result ended up publishing three books before the year was up. One of those books I wrote from scratch (Charlie Sparrow and the Book of Flight, Tales of Tree City, Book 2), one was in rough draft form at the start of 2017, so I edited it throughout the year (my sci-fi adventure novel, The Maker), and the last was a re-issue of a book I originally published in 2013, this time with new illustrations (Charlie Sparrow and the Secret of Flight, Tales of Tree City, Book 1). So last year was a year of writing, editing, and book production.

The writing and editing takes a long time and a lot of effort, but a lot of effort is also involved in the book production part. I worked with a cover & book designer, an illustrator, and multiple editors to bring my three projects to completion and give them a professional polish.

With three books released in 2017, I'm looking forward to 2018 being a year of sharing my work with readers, whom I hope will find the end result professional and entertaining. I am also off to a decent start on The Maker part 2, which I hope to complete in 2018 (maybe with an early 2019 launch?). And Book 3 of the Charlie Sparrow/Tales of Tree City series is being written somewhere in my subconscious mind, hopefully to appear on the page (meaning in MS Word on my iPhone) sometime in 2018 as well.

So many writing projects, so little time in a day!

Thank you very much for spending time with us today, and congratulations on becoming a dad! Children add a fun and interesting dynamic, and who knows, she might be the inspiration for your next series. We look forward to the release of The Maker, Part 2. 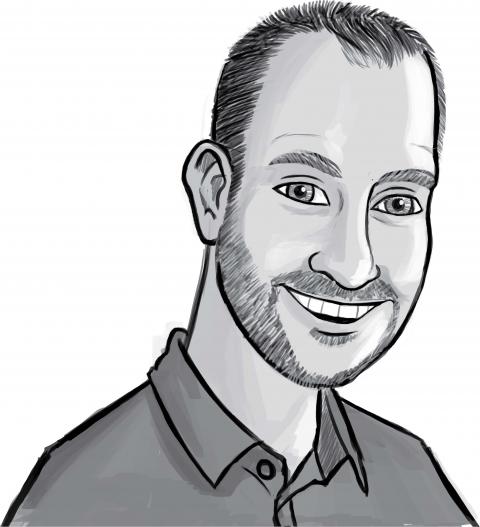