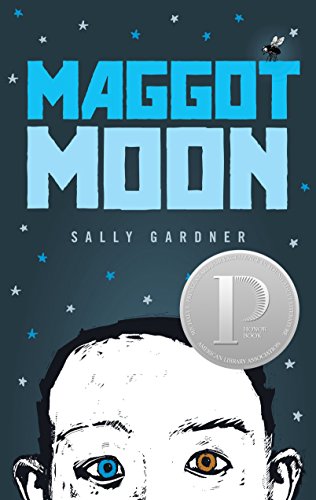 Standish Treadwell lives in an alternate universe to our own, where Nazi Germany has succeeded in taking over the world, and resistance is far-spread and weak.  Standish has the unluckiness of possessing both unidentified dyslexia and two different colored eyes – imperfections that make him nearly incompatible in the Nazi world.  In this way, he is lucky to live in the lowest dumps of the Motherland, in a small town hunched against a giant wall.  However, behind this wall lies an equally giant secret – a secret that could change Standish’s world.  When Standish’s best friend Hector and his family disappear, Standish begins to question his role in the oppressive world around him - and find that even “imperfect” as he is, he can stand up to wrong.

Though in some ways simply written, I found Maggot Moon to be a very powerful book.  Although its syntax and diction was basic enough for middle schoolers, its language and imagery was coarse and crude, reflecting the lives the characters lived.  This originally turned me off the story, yet as I continued reading, I found that the excellent character development and themes of courage and rebellion in the story overpowered any negative effect the grammar had originally had on me.  The themes and ideas presented in the story, though dark and sometimes depressing, were truly adult, and I can say that the story made me cry in the end.  I would recommend it to any high school reader who would like a quick yet thematically and emotionally powerful read.

Read more reviews by this Litpick Book Reviewer: rmaehill
Recommend this book and review to your friends on Facebook