The Jericho River review by ZoeDessoye1 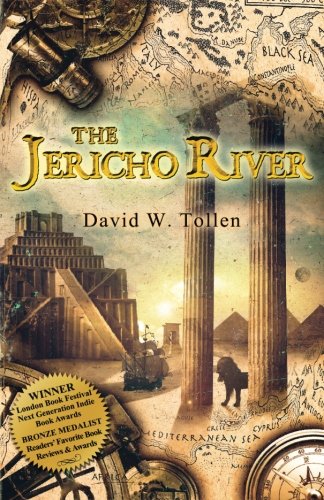 The Jericho River
by David W. Tollen
Age Range - 12 and up
Genre - Adventure

The Jericho River, by David W. Tollen is a historical fiction novel that revolves around a young, rebellious teenager named Jason Gallo. The novel opens with Jason and his sister, Athena, frantically trying to awaken their sleeping father, who is trapped in a sleeplike coma.

In order to rescue his father, Jason is forced to enter the dream-reality world known as “The Fore."  His father is Professor William Gallo, an esteemed historian who has been trapped in this alternate reality world from which he cannot escape. Jason sails along the Jericho River, beginning in Ancient Mesopotamia, and travels through every time period known to man-kind.

While on his journey, Jason meets and befriends several people, as well as various magical, animal-like beings known as ‘Lumins.'  Zidu, a lion-like Lumin from Sumer, and Tia, an Egyptian priestess, become Jason’s greatest friends and allies in The Fore.

Unfortunately, Jason does not only meet friends along the way. He also encounters those who do not share his mission. The scientific minds of ‘International Empirical Society (IES)’ of Oxbridge make many attempts to thwart Jason during his quest to liberate his father from their influence.

The Jericho River was a very enjoyable read. I liked that it was fiction, but it was filled with a great deal of historical information. The author’s use of footnotes throughout the novel, as well as the historical introduction at the beginning of each chapter, was especially helpful for me. I was learning new information and being thoroughly entertained with the action all at the same time. I also enjoyed the numerous characters and their diverse personalities.

This novel should be recommended to students from the ages of 13 and older. The vocabulary was not very challenging and the information was comprehendible so there would not be any difficulty for younger students to understand. However, the content of this novel could be categorized as ‘mature,' due to the bloodshed, fighting,  and use of weapons. There are also different views on religious situations and some discrimination of race and religion.

My only criticism is the pace and suspense of the story line.  The historical situations were so engaging and action-packed, I would have enjoyed even more of this book; it was very well written and enjoyable.

Bloodshed Fighting Use of weapons Religious and racial prejudice
KEYWORDS

Read more reviews by this Litpick Book Reviewer: ZoeDessoye1
Recommend this book and review to your friends on Facebook