David W. Tollen is a multiple award-winning author of fantasy novels that teach history and science. His books are for both adults and young adults.

David's first work of fiction is The Jericho River, A Novel About the History of Western Civilization (Winifred Press 2014, 2015). It’s a spellbinding, award-winning fantasy that seamlessly blends history and mythology -- teaching the entire story of Western Civilization, from Middle Eastern roots to modern times. His second novel is Secrets of Hominea, a fantasy that teaches science and history -- to be published in the not-too-distant future.

Joining LitPick today for a Six Minutes with an Author interview is David W. Tollen. David is the author of The Jericho River, A Novel About the History of Western Civilization. This is David’s first work of fiction. It won first prizes at both the Next Generation Indie Book Awards and the London Book Festival. It also won a bronze medal in the Readers’ Favorite Book Reviews and Awards Contest. David, who holds law degrees from Harvard Law School and Cambridge University, also writes about the law and is the author of an American Bar Association best-seller.

I left my job to work on some creative projects—mostly business ideas—and I swore the one thing I would not become is a writer. I loved writing itself, but the writing business and lifestyle sounded really difficult. I quickly found, though, that most of my business ideas led in impractical directions, at least for me. I wanted to create worlds—built on foundations of history, science, and art—but that’s pretty difficult outside the confines of the imagination. Building virtual worlds for computer games sounded fun, and so did building real-world amusement parks or even stores with products for history buffs and science enthusiasts. But I really didn’t want all the labor surrounding founding or running a business. Inevitably, my ideas took form on paper—or rather in word processing systems. Soon, they evolved into stories. I had become a writer. And though the challenges surrounding writing as a business and lifestyle are very real, the writing itself pays for all. I love it.

JRR Tolkien has influenced me more than any other writer. If you don’t know Tolkien well, you might find that surprising coming from an author focused on using science and real history in fantasy. But Tolkien’s all about building new worlds on top of real knowledge. Middle Earth springs from the ancient languages and cultures of the English people: the subject of Tolkien’s scholarly work. I think that’s why his world feels so authentic. Since I first read Tolkien in the fourth grade, and started drawing maps of my own imagined lands, I’ve wanted to create worlds the way he did.

I’ve also been influenced by—and love—authors who turn nonfiction into compelling stories. Jared Diamond’s Guns, Germs and Steel inspires me for instance, and so does Durant’s The Story of Civilization series, with its amazing prose and colorful images (despite a little carelessness with the facts).

I also love the use of pithy, colorful footnotes in fiction, like in Clarke’s Jonathan Strange & Mr. Norrell and Stroud’s Bartimeaus books. (I had already used footnotes that way in The Jericho River before I read either of those books, but it was nice to see other authors doing it.

I most enjoy the type of stuff I write (not surprisingly): stories of other worlds based on real science and history. So I love science fiction written by scientists and other experts, like Greg Bear’s novels and Michael Crichton’s. I also love clever historical novels, like Robert Harris’ Pompeii, which applies science and history to the story of the 79 A.D. eruption of Mount Vesuvius. Finally, I love novelists who mix seemingly separate and disconnected themes—like Grossman’s Magicians books, with their themes from Narnia, Harry Potter, and the lives of bored, angst-ridden New York prep-school graduates. Brilliant.

I’ve seen no one build other worlds based entirely on history, so that’s what I set out to do in The Jericho River. As you know, it turns a timeline into a literal, physical river in an alternate world—so the hero and the reader can explore past societies following the true arc of history (and also meet each society’s mythic creatures: sphinxes, angels, etc.). My next novel, Secrets of Hominea, builds its world in similar ways. Its world-name, Hominea, comes from “hominin”: the scientific term for Neanderthals, Australopithecines, and other human relatives far closer to us than chimps. They’re all extinct in our world, but they live in Hominea, and so do mysteries of evolution, biology, and history. It’s a fantasy adventure—this time for younger readers: middle grade. (I hope it’ll be on the shelves in 2017.)

Edward Gibbon was the 18th Century author of The Decline and Fall of the Roman Empire, and he made an interesting observation about happiness and indirectly about writing. He quoted the 9th Century Caliph/Emir of Cordoba (Spain), who said that his life of glory, honor, power, and pleasure had brought him approximately fourteen hours of happiness. In a footnote, Gibbon writes: “[M]y happy hours have far exceeded … the scanty numbers of the caliph of Spain; and I shall not scruple to add, that many of them are due to the pleasing labour of the present composition.” Writing itself made Gibbon happy, and so he wrote and wrote. (Decline and Fall covers a vast subject in six long volumes.) Same with me. If the same goes for you, you’re a writer. You really have no choice: writing will claim you. Enjoy it.

Cafés! I actually get more done surrounded by the buzz of a café than anywhere else. And those venues work all the better because I have a serious iced coffee habit. But I’m not particular, and I can happily write almost anywhere.

If you’re out there suffering under a boring history professor, teacher, author, or other pontificator, take comfort! History is not names and dates but rather tales of

romance, betrayal, pageantry, heroism, corruption, and adventure. Look for those stories of adventure behind the tedious details. They’re always waiting to be found.

Also, I hope you’ll come visit my website, www.DavidTollen.com. It’s got art related to The Jericho River and Secrets of Hominea, including some great posters and fascinating cover designs that didn’t quite work out. You’ll also find articles about history, at my Pints of History blog, linked to the website. And you can sign up for notices of new books, speaking engagements, etc.

Thank you for joining LitPick for six minutes, David! That is such an interesting story about how you got started writing. We are already looking forward to your next book, Secrets of Hominea! 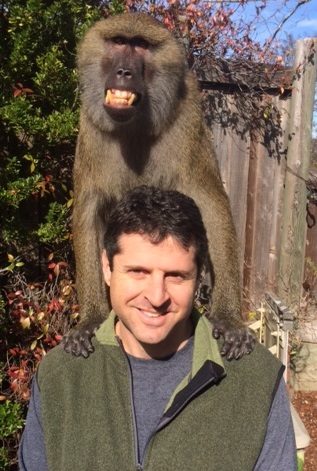