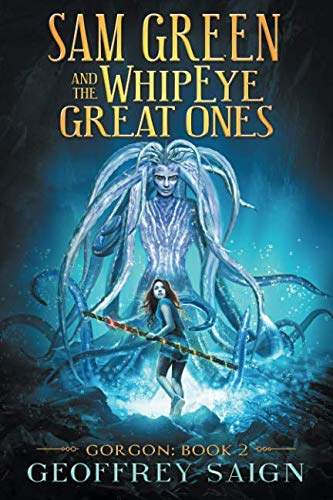 Gorgon is a fantasy adventure continuing the journey of Sam and Jake. In the first book (WhipEye), Sam and Jake accidentally end up in the dazzling, wonderful land of Kira Ku with the majestic, wooden staff, Whipeye, as their defense. They hastily travel through Kira Ku trying to gain supernatural help to defend against a wretched villain. In the sequel Gorgon, Sam and Jake now have only two days to save their poisoned parents. The only one who has the antidote in Gorgon, the ruthless and cunning leader of the Amazon Lessers. But Gorgon is creating a vicious plot, and is using Sam and Jake to execute it. Worse, Sam feels as if the magical staff, Whipeye, is controlling her actions. Jake gains a threatening weapon, and Gorgon pits Sam against Jake. Will their friendship survive its greatest test yet? Follow Sam and Jake on their journey in the exciting second book in the Sam Green and the WhipEye Great Ones series!

Gorgon is absolutely one of my favorite books! It’s exciting, nerve-wracking, mysterious, and thrilling! The story is told from the perspective of the main character, Sam. Her best friend is a boy named Jake, who is a strong secondary character.

Geoffrey Saign does a wonderful job of developing the plot quickly, while expertly developing the characters as well. Each character, though magical and unrealistic, has his or her own way of relating to the reader and becoming believable. For example: Gorgon has undeniable aspects of a simple villain who desperately wants to execute his evil plot, as all villains should. Yet in the end, we learn that Gorgon is much more than he seems.

The plot is genius. The originality of the story will easily hold you captive. Fast-paced and surprising, the author does a superb job of transporting the reader into the story.  With surprise plot twists around every corner, this is definitely a book you won’t be able to put down!

Read more reviews by Litpick Student Book Reviewer: moseso
Recommend this book and review to your friends on Facebook