City of the Yeti review by jotaf 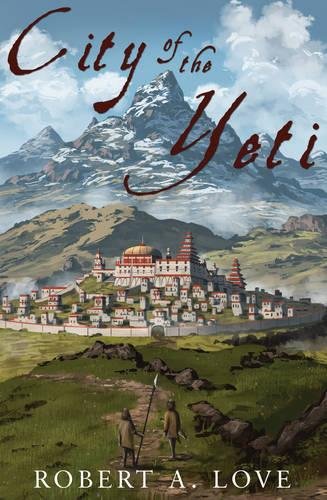 City of the Yeti is a book about fourteen-year-old Danny and his younger sister Rachel. The year is 1922, and the two British children live with their parents in India, just outside the city of Lakhnau. They have always thought that the people of India were happy living under British rule...until they are attacked in the streets of Lakhnau.

They could have been seriously injured or killed if not for their friend Kumar. He persuades the mob to leave them alone. The night after the attack, their parents decide that it's too dangerous to continue living in India. However, before they leave, they want to look for their missing relative and explore more of India.

They do many things during their exploration, including visiting monasteries, hiking, and riding horses. While horseback riding, the kids become separated from their parents and find some mysterious creatures called Sramana.

The mysterious creatures take them to a city hidden in the mountains and reveal themselves to be the ones behind the legend of the Yeti. Danny and Rachel are also told that every year a few people are chosen to know about them. During their stay, the children discover the Sramana are facing the challenge of humans getting closer to their village. They are also on the brink of war with a rival clan.

Will Danny and Rachel be able to fix these kind-hearted creatures’ problems? Or will they fail them and go down with them? Find out in City of the Yeti.

I really enjoyed City of the Yeti. It was an awesome book with a cool storyline that I haven’t encountered before. A couple of kids find their way to a group of mysterious creatures that are the basis of the Yeti legend; what’s not to love? I really enjoyed the characters’ personalities. They were relatable and easy to fall in love with. I found myself rooting for them all the way through the book.

A part in the book I really enjoyed was when Danny thought up a creative and complex way to take care of both of the Sramanas’ main problems at the same time.

I loved this book from start to finish. I would recommend this book to ages 12 and up as there are some mature themes running through the book.

There is some death, fighting, and blood. Also, there is use of the extended form of OMG.
KEYWORDS