Bridge Through Time review by Sweetfable 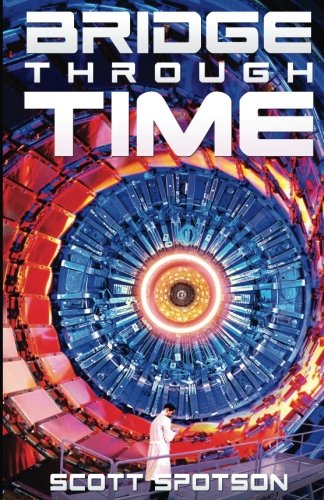 Kyle Thorning, a physicist at CERN, always felt like he never belonged in the place he grew up in. It turns out that he may have been right. Bridge Through Time (by Scott Spotson) follows Kyle, now a man living in the 2020’s, as he finds out more about his life and the world around him through scientific discoveries.

He learns that his father, Max Thorning, once traveled back in time to relive his high school years. This caused a parallel timeline to occur, one where Kyle and his brother Peter were born, and one where they were not. Kyle was born in Max’s second life, or Life II. In Life II, aliens called Darsians have arrived on planet Earth. Although they have made technological advances that have helped humans in many ways, Kyle believes they are up to no good.

After his father dies, Kyle finds out about Life I, where Max had a totally different life with a different family. He also learns that his father may have been unintentionally responsible for calling the aliens to Earth. For these reasons, Kyle is determined to make his own time machine to go back to Life I and fix his father’s mistakes, in order to prevent the alien invasion, but at what cost?

This book was quite good in my opinion. I had not read the first novel in the series, nor did I have any knowledge of the storyline going into this book. So when things quickly switched to Kyle’s point of view, I had little idea what was going on. It took me a little while to get the characters and situations straight, but when I did it was quite rewarding. Although this was the second novel, much of the information that was in the first novel was explained in this one, making it easier for me to comprehend things like Dr. Time and the Time Weaver. It was confusing for me as a reader when the abrupt switch to Kyle's point of view from Max’s perspective occurred. I was just beginning to comprehend how Kyle grew up, when all of a sudden he became the main character and his father faded into the background. Occasionally other perspectives were thrown in to showcase other characters' inner thoughts, but at times this made for jarring transitions.

I liked how there was an optimistic view of the future, especially in Life I. Even in Life II, where things were much more advanced because of the Darsian’s influence, the new inventions that were explained in detail were very interesting. I connected with many of the characters, especially Kyle and his girlfriend Eva. I liked how the dates were shown at the beginning of every chapter, making it much easier for me to follow exactly when and where events were happening. Kyle and his brother were essentially my age because of the years they were born in, which helped me to make another connection.

The pace of the novel flowed quite well at most points, and held my attention. I enjoyed the inclusion of some real life physics in the book. For example, the Casimir effect is mentioned, which I just learned about a couple of weeks prior to reading! I enjoyed this read for how realistic it remained even though it is science fiction. I would read more books by this author in the future.

There is some explicit language used occasionally.
KEYWORDS