The Books of Barakhai review by jotaf 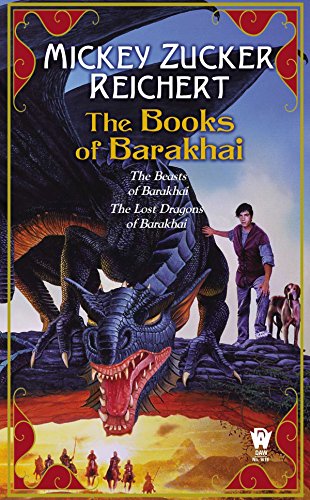 The Books of Barakhai is two books in one.  Both books are about a boy named Benton (Ben) Collins.  His adventure began when he was working in his college lab one night during Thanksgiving weekend.  His assignment was to feed and water the white lab rats.  When he was nearly done, one of the rats escaped.  Worried his professors would flunk him if they discovered one of the rats missing, he chased after it.  After the rat led him into a strange storage room and he realized he’d been chasing him for over three hours, he found himself in the ruins of an old building on a hill.  During the chase he lost his glasses, so when he came to a window,  he couldn’t judge distance very well and fell out!  When he finished rolling down the hill he realized he was ravenous.  He thought he should look around for some small game that he could kill with his pocketknife.  Conveniently enough, there was a rabbit nearby.  So Ben lured the rabbit in, killed it, cooked it, and ate it.  When he barely had anything left of his meal, men on horseback came by with dogs.  Glad to see another human again, he greeted them and offered the dogs some of his rabbit.  Without explaining anything else, though, they brought him into town on horseback and threw him in jail.  He tried to explain to multiple jailers that he didn’t do anything wrong, but strangely enough they all kept talking gibberish. Finally, he was able to talk to someone who could speak English.  He was horrified at what she explained to him.  She explained that he was in a place called Barakhai and that the rabbit and every other animal in Barakhai was actually a human in its switch-form, which means every human spends at least half the day as an animal.  She also said that in Barakhai the sentence for cannibalism is hanging.  Needless to say, his life was forever changed.

The Books of Barakhai is a great book.  I really liked that they made it two books in one so you get twice the books and twice the enjoyment.  Two of its weak points, however, are that it takes at least ten pages for it to really get going and it is a little confusing in some areas.  It has lots of good qualities, too, such as great character development, humor, and an interesting plot line.  My favorite character was Ben because he was funny and determined to get back to Earth.  The author, Mickey Zucker Reichert, took a risk that paid off nicely in this book.  I feel this book is for more advanced twelve year olds and up due to the maturity of some of the content.  If you like fantasy and adventure, mixed with a little sci-fi, this book is for you.

some bad words, one case of accidental cannibalism, naked people, descriptions of naked people, and some other mature content
KEYWORDS