Ashes of Twilight by Kassy Taylor review by Ravett... 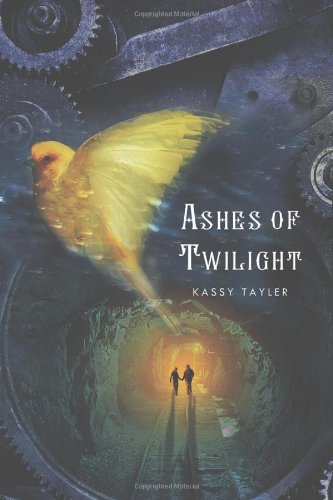 In the novel Ashes of Twilight by Kassy Tayler, main character Wren MacAvoy has always dreamed of what's outside the dome that confines her. She'd sneak away from the underground mines every morning to watch the sunrise. Her friend, Alex, decides to make a run for it and leave the confines of the dome, only to be burned to death in the process. His last words were "The sky is blue." Wren, having always wondered what was outside the dome, tries to discover whether there really was a world outside the dome or not. Shortly after Alex dies, Wren is chased by a cadet named Pace Bratton. Not much time passes before both Wren and Pace are wanted for murder, which leads to Pace meeting up with Wren, asking for her help. She accepts, and takes him underground to hide him in a cave, hoping that no one will find him. Wren's grandfather, and only known relative, dies in an explosion in an attempt to stop the bluecoats (officers) from finding Wren. His last words tell her to fight against the bluecoats and to fly freely like the birds from which she was named. With the help of her friends, they leave the cave in an effort to find the exit that Alex had taken when he escaped and met his demise. After failing due to an explosion in the dome, they return to the tunnels only to be once again attacked by the bluecoats. Another explosion occurs, and the mines begin to flood, taking the lives of many animals and villagers. Wren and Pace continue to search for a way out of the mines and out of the dome. Survival seems difficult as most of the tunnels are flooded and there isn't any food. Will Wren and Pace find their way out, or be trapped in the tunnels to meet their demise?

This was a beautifully, and intelligently, written novel. It was definitely an enthralling read. I loved the character development and how the characters changed throughout the story. I also liked the plot and how the suspense never ceased. I also enjoyed reading about a realistic, and very creative, type of world where people are physically restricted. Lastly, I liked the character Wren because she was one of many who thought about the escape from the dome, yet the first to act on it; which made her admirable.

I would definitely recommend this to anyone of at least thirteen years of age, due to mild profanity.
KEYWORDS

Read more reviews by this Litpick Book Reviewer: Ravette
Recommend this book and review to your friends on Facebook