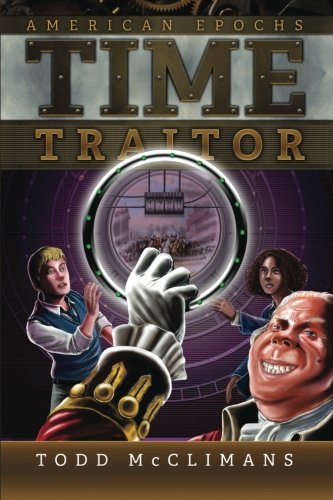 In Time Traitor by Todd McClimans, the main characters, Kristi Connors and Ty Jordan, are just two kids attending George Washington Prep School. Kristi hates the place and is trying to get herself kicked out by humiliating her history teacher, Xavier Arnold. She rigs up his desk with explosive fireworks, unscrews his desk chair, and basically just annoys him every waking hour at Washington Prep.

Ty, originally from England, is as timid as a mouse, hiding out from bullies and trying to get his school work done in the unlikeliest of places. When Ty sees Kristi rigging another trap for Arnold, Kristi becomes worried he might snitch. During Arnold’s lesson, his desk explodes and he demands to know who did it. Naturally, if Ty tells on Kristi, she would be expelled, but he sticks up for her, so they become relatively close friends.

When the two of them trace Arnold's family tree back to Benedict Arnold, the American traitor, they become suspicious of something. After Kristi is sent to detention with Mr. Arnold and she hears something strange, she soon realizes what Mr. Arnold has done: made a time machine. Ty soon finds Kristi with Mr. Arnold, but she is scared as she is tied up. Mr. Arnold kidnaps them, bringing them with him on his mission: to rewrite history in his great ancestor's favor.

I really enjoyed Time Traitor because of its twisting turns of the story, the science of the time travel, and the characters’ personalities. In the book, as the characters talk and go about their work, I felt like I was yet another character watching them. The whole concept of time travel amazes me, so this book was a perfect fit for me! I give this book five stars, only because I can’t give it more. I would recommend this book for all ages but for 10-12 in particular. I am definitely going to read the other books written by Todd McClimans if they share but a fraction of the incredible writing!

Read more reviews by Litpick Student Book Reviewer: Joshchipmunk
Recommend this book and review to your friends on Facebook