The Strange Maid review by Shay-Ainahs 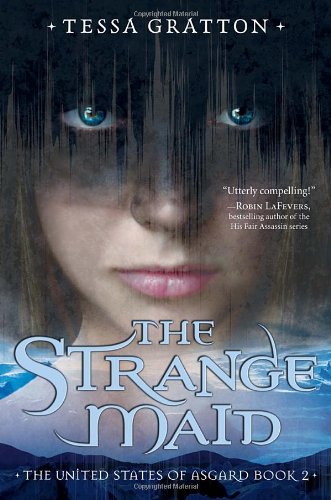 In a world where Norse Gods and the United States of Asgard are bound side by side in the Covenant, Signy Valborn was destined to become The Ninth Valkyrie since she was just seven, and her parents had died. She had climbed up on the New World Tree and found the Alfather, Odin the Mad, god of the hanged, and he made her the destined Valkyrie of The Tree.  And then years later, burned into that very same tree-

The Valkyrie of the Tree will prove herself with a Stone Heart.

So traveling with Ned the Spiritless (The mysterious Ned Unferth) into Canadia to search for a Greater Moutain Troll, Signy will uncover the real truth of the great mother trolls and Valtheow the Dark, and chose to accept her fate-or overcome it in this second book of The United States of Asgard.

Skimmed the book, read the poetry, smashed it into the wall a few times after Ned died (though you get that vague suspicion that he'll miraciously survive again, 'cause books defy reality--sometimes.). It's a pretty good book, though. I really enjoyed it. Perhaps I'll read something by the same author in the future.

Read more reviews by Litpick Student Book Reviewer: Shay-Ainahs
Recommend this book and review to your friends on Facebook