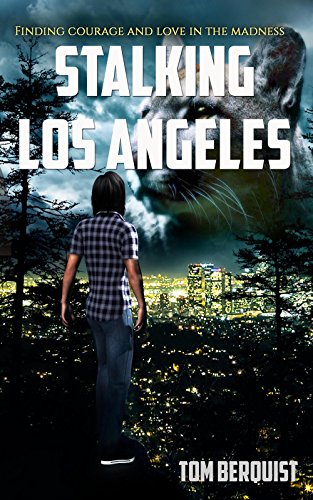 Nothing seems to be going right in Reggie Youngblood’s life. He recently moved from his familiar house nestled in the woods to the suburbs of Los Angeles. His dad is serving in the war overseas, but still finds a way to give Reggie a hard time. On top of that, a bully is constantly teasing Reggie about his Indian background.

Reggie soon finds his escape in studying mountain lions and his Indian heritage, and quickly becomes so invested in these subjects that it begins to affect his personal life. The story is uniquely told from the alternating points of view of Reggie and a mountain lion roaming the forests of Los Angeles. Their lives collide as the story unfolds. Read Stalking Los Angeles by Tom Berquist to discover how Reggie falls in love, discovers himself and learns some of life’s most important lessons.

I enjoyed reading Stalking Los Angeles. I thought the storyline was a very original idea; I’ve never read a book like this one before. I liked how the author used alternating perspectives between Reggie and the mountain lion, because it allows the audience to watch how their two lives intertwine.

The main character, Reggie, was likable and easy for me to relate to. He had to deal with many challenging life situations and handled them in a realistic way. I thought the plot moved along at a nice pace, and it always held my interest. I found the end of the story slightly confusing, when Reggie went on his “vision quests." However, the ending clarified my confusion and wrapped everything up nicely. I really enjoyed reading Stalking Los Angeles and would recommend it to others.

There is explicit language, some sexual references and mild violence.
KEYWORDS