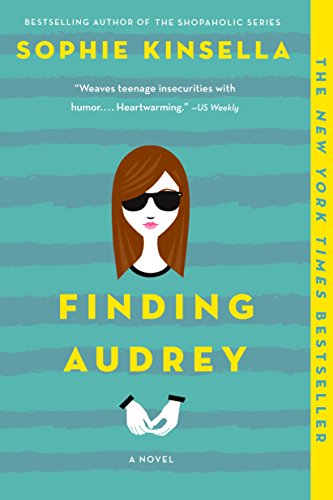 Fourteen year-old Audrey’s style trademark is her pair of dark glasses that she never takes off. While the shades look movie-star glamorous, they tell a grim tale. Ever since she was bullied by a vicious band of girls at school, Audrey has suffered from depression and social and general anxiety disorder. When she looks into someone’s eyes, she automatically feels judged and threatened.

Audrey wants to get off meds and become her old self again, but she can’t even bring herself to order food at a restaurant. Her therapist suggests that filming her surroundings and interviewing people could help her reintegrate into society. So Audrey, armed with a film camera and all the bravery she can muster, sets out to document her life.

Of all her interviewees, it’s Linus, Frank’s best friend, who inspires her to change. It doesn’t hurt that he’s both cute and sweet! Linus urges her to step outside her narrow comfort zone, and Audrey begins gaining self-assurance. But her new strength also comes with overconfidence. Audrey’s journey to recovery is one with peaks and valleys that will make readers laugh and cry at all the right moments.

The one-sentence summary of Finding Audrey is: Teen girl uses video camera to heal from depression and anxiety disorder. But while that description is certainly accurate, there is no way to put all the wit, humor, and love in this book into just a few words. In her first foray into young adult literature, Sophie Kinsella has crafted an entertaining story that is quick to read but difficult to forget.

Audrey may have suffered from depression and an anxiety disorder, but she is blessedly free from Main Character Malady, an unfortunate syndrome in which the storyline consists of a protagonist essentially chanting me-me-me-them-me-me. Not once did I feel that Audrey was bratty, whiny, or self-centered. Her health issues were dealt with appropriate gravity, but they did not weigh down the novel. Kinsella dedicates plenty of time to other characters, making sure that Mum and Dad were not just people who served dinner and drove cars.

The subplot of her older brother, Frank’s, video game obsession was amusing and added comic relief. His love of Land of Conquerors is slightly blown out of proportion, but it’s all in good fun. And if the author can add a little message about balancing your time wisely, why not? Of course, the video game competition also introduced the romantic interest, Linus. The “older-brother’s-best-friend” twist is a common trope, but it made sense given that Audrey didn't go to school or hang out outside. Plus, given that there was no angsty love triangle, I can easily overlook the cliche.

One of the book’s brightest charms is its sense of familiarity. Audrey often speaks directly at the reader in a casual tone, so it seems like you’re having a conversation with a friend. British words like “Mum” and “trainers” remind readers of the UK setting. Pop culture staples, like Harry Potter, The Big Bang Theory, and Scott Pilgrim, also fill the story. Those references make it easy to imagine the characters as real people: Mum watching Downton on Sundays; the family munching Doritos and guac; four-year-old Felix adorably singing the songs from Frozen. Either it’s shameless advertising, or Kinsella really knows how to make her readers feel at home.

Finding Audrey is a gem that is perfect for teen girls looking for a realistic yet romantic read that’s packed with laughs, love, and the power of you.