The Shadow Lantern review by Ravette 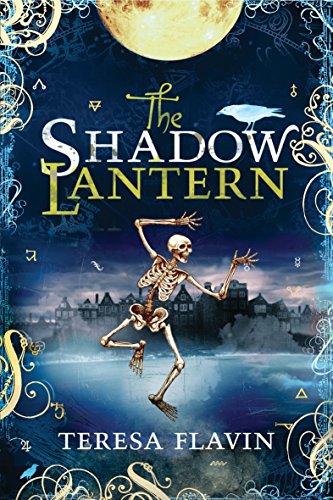 Sunni and Blaise are dragged once more to Blackhope Tower when a mysterious oil lantern appears. This lantern however, contains painted slides that conceal the secrets of Fausto Corvo's lost paintings. After journeying inside, they discover Corvo's old enemy, Soranzo, who is still seeking both the paintings and passage into the Marineer's Return to Arcadia. Soranzo, however, will stop at nothing to find Corvo. He even proceeds to kidnap Blaise and Sunni's art teacher after going into one of the painted slides. If this isn't challenging enough, Angus, the art teacher's cousin, reappears as Soranzo's ally in his own attempt to free himself of Corvo's magic. With so much at stake, Sunni and Blaise must now fight to protect both Corvo's secrets and rid themselves of Soranzo once and for all.

The amount of detail in this novel was truly astounding. I struggle to find the appropriate words to describe how the Shadowlands from the painted slides and Arcadia from The Marineer's Return to Arcadia actually combined into one "thing." More or less, it was like trying to make sense out of Wonderland. Despite that, I loved the way the story played out. Even more so, I enjoyed Marin and Angus's reappearances; which were unexpected, but pleasing all the same. An even more shocking detail was the reappearance of Lady Ishbel, who had died in the second novel after leaving the labyrinth. She had "reappeared" as a spirit that haunted Sunni for a short time before returning inside the painting. As an added bonus, there was even a little romance between Sunni and Blaise; which I thought was, for lack of a better word, adorable. All in all, I enjoyed this novel to the fullest and I highly recommend the series to anyone interested in art, magic, and adventure.

Read more reviews by Litpick Student Book Reviewer: Ravette
Recommend this book and review to your friends on Facebook