What do you like best about writing for young people?
I create fantastic, strange worlds that my teen characters must navigate and make sense of. I love it that young readers embrace these crazy worlds and become invested in the characters. When I speak to school groups I get wonderful questions and comments that show me how excited young readers become when stories engage their imaginations – when they are fired up, it inspires me!

Please describe The Blackhope Enigma trilogy in ten words or less.
Three teens are drawn into an artist-sorcerer's mysterious worlds.

What is your writing process like as an author?
Because I sometimes write to a deadline, I tend to plan my stories first and have a good idea of what will happen, though things usually evolve as I write the draft. Characters often invite themselves in and change my plan! However, I am experimenting with writing a bit more spontaneously at the moment, just to see what happens. When I am working toward a deadline, I make sure I write a section or chapter every day. Even if I am not feeling that inspired when I start, I always warm up and get into the scene I am writing.

Who was the character you were most drawn to and why?
I had a great time with one of the baddies, Angus Bellini. He's charismatic, sly and clever – and he has some of the best lines as baddies often do.

What is your favorite line from your book/trilogy if you had to pick one?
It would have to be the opening line in Chapter One of The Blackhope Enigma: "That's where they found the skeletons. Right where you're standing."

You wrote the trilogy while you were living in Scotland and you now live in England. How has living in these countries influenced your stories?
The history, landscape, mythology and language of the British Isles have had a huge influence on my writing and my artwork. I love being able to visit castles that have been around for hundreds of years or to walk down cobblestone lanes lined by old houses. There is so much inspiration in history and folk tales, I have loads of material for stories and illustrations.

What can you tell us about the final book in your trilogy, The Shadow Lantern, which Candlewick will publish in July?
The Shadow Lantern is set at Halloween, when the separation between our world and the spirit world is very thin. Sunni and Blaise, the main characters, return to Blackhope Tower for a holiday festival and encounter a showman, Munro, who is exhibiting a mysterious old magic lantern. When they discover that the lantern was created by the same Renaissance painter-magician whose secrets they have sworn to protect, Sunni and Blaise are drawn into dangerous hidden worlds and threatened by adversaries both alive and dead. 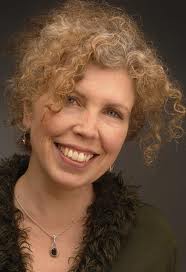